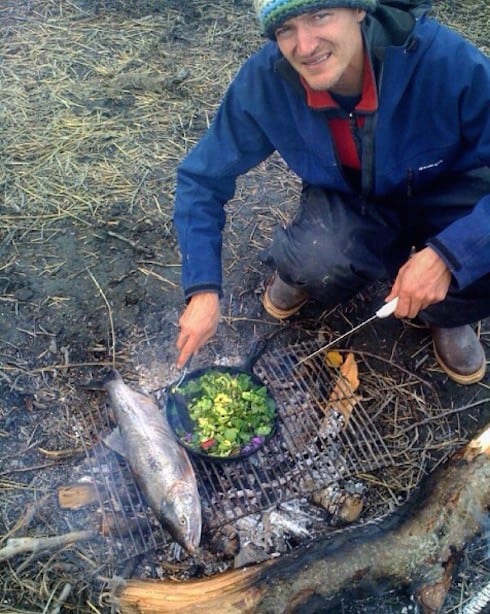 The latest Atz Lee injury update has Alaska The Last Frontier fans breathing a heavy sigh of relief. It was almost exactly one year ago that the TLF mainstay and Discovery star suffered unexpected injuries in a hiking accident–ones so severe that his future participation with the show was even in question for a time. Atz’s wife Jane shared the official press release shortly after Atz was hospitalized, and her report was straightforward: Atz “suffered a terrible fall when hiking in Otter Cove. His injuries included a broken arm, a broken shoulder, broken ankle, a broken hip, crushed ribs and two punctured lungs.” (Atz had been hiking with a friend, who also suffered injuries; fortunately for the pair, the friend’s injuries were comparatively minor.)

But if seeing Atz’s x-rays were shocking, it was downright strange to see him bedridden:

Thankful to be alive and at home with my wonderful family. My broken bones are healing nicely considering how many I broke. Lungs are holding strong and every day I feel a little stronger. The temperature is dropping, leaves are falling to the ground and the busiest time of year is upon me, but I know my family has my back and before long I will be back amongst the walking. Work hard,dig deep and never give up.

Still hard to acknowledge how bad off I was. Broken ankle, hip,shoulder blade, arm,two punctured lungs and over a dozen broken ribs. My recovery is going slow but steady to me but the DRs say I'm recovering fast all considering.working hard with my physical therapist and looking forward to running and jumping from trees and mountain tops again someday. Thanks to my family for being by my side and thanks so much to all the people that have been keeping me in your thoughts and prayers. Patience is my friend.

Fortunately, it sounds like Atz has been able to return to his homesteading and backcountry ways. The most recent Atz Lee injury update came from the man himself, who took to Instagram to look back upon how dire his situation had been months before, and celebrate his good fortune in recovery:

A year ago today I was humbled by gravity, fear and friendship. It's been a hard recovery but I can't complain all considering. I still have my health, family and friends and that is a blessing for sure. Thanks everyone for your support and good wishes, things are different now of course but all in all I am well. #lifegoeson

The good vibes continued with a lovely sunset shot in celebration of Atz’s birthday:

And, as is often his wont, Atz further used the social media platform to try and remind fans and casual observers alike that we should all slow down and appreciate what we have during our very brief time on earth:

Take time in life to let things reveal themselves in real time. Current society seems to push the false reality that those who work fastest and accomplish the most are the ones to reap the most benefits. I feel that it is more important to devote yourself entirely to whatever brings you the most joy, regardless of the time frame or final outcome. The greatest things in life take time, and it's crucial to make sure that there is enough time left over before we die, so that we can sit back and admire the work we've done with those we love, with no regrets.

On a related note, if you’re an Alaska TLF fan (or a lover of the great outdoors) and you aren’t checking out Atz Lee on Instagram, do yourself a favor and follow him. Atz posts somewhat infrequently, but he shares some of the most beautiful nature photography on social media.

Lamar Odom ‘fighting for his life’ after being found unconscious