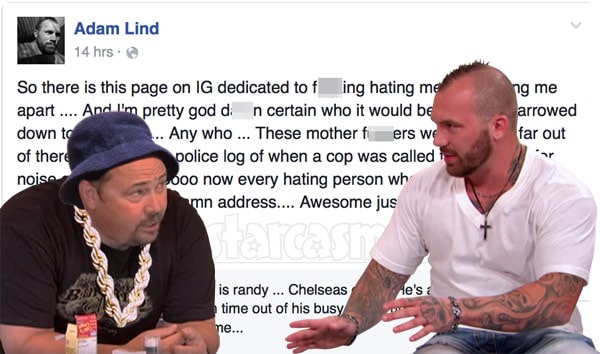 Teen Mom 2 dad Adam Lind can add yet another reason to want to leave the show after an Instagram hater page posted his address online. Adam was understandably furious, and asked his followers to report the page. He later offered up his thoughts as to who was behind the page, saying he has “a strong feeling” it is Chelsea’s dad, Dr. Randy Houska!

So there is this page on IG dedicated to f**king hating me and tearing me apart …. And I’m pretty g0d damn certain who it would be … I got it narrowed down to a few ppl … Any who … These mother f**kers went sooooo far out of there way to find a police log of when a cop was called to my house for noise complaint …. Sooo now every hating person who follows that page knows my exact g0d damn address…. Awesome just awesome !

The post inspired a series of comments by fans as well as responses by Adam and his fiancée, Stasia Huber. Included in the comments is a Timehop photo shared by Adam featuring a post left on his wall by Chelsea Houska seven years ago — right after they found out they were going to be on 16 and Pregnant!

COMMENTER: Why. Do. You. Care. People that have time or motive to do this are complete losers.

ADAM: Whyyyy do I care ?! I have children who live with me on the weekend ?! And now my address is known world wide … Got some crazy f**k that might come here and try something or burn my god damn house down

COMMENTER: Absolutely Protect yourself then but quit reading garbage and taking up your time! I’m not going to comment any further.

ADAM: The sh!t gets sent to me I don’t sit at home and look for this sh!t I got better sh!t to do

ADAM: Trying to paint my f**kin walls and lay down new hardwood floors till my phone gets blown up by randoms sending me screen shots of a hate page posting my address….

ADAM: Let the vandalism begin…. … Got rid of that stupid big ass truck cuz I was sick of paying for new tires …. This is great just greatttttt

STASIA: Police are on their way, lawyers are being contacted, and instagram will be contacted via police and Lawyers for an ip address to locate the person to ensure legal action

STASIA: Child endangerment, harrassment, knowingly enforcing possible harm… plenty of things this can be used as especially when children are involved

COMMENTER: Why do people think this is ok, when knowingly you have children involved! It’s sick x

STASIA: This page likes to say it’s concern is what’s best for aubree… lies. This is just asking for some psycho in the area to do something… whoever runs this page is messed up and has no respect for anyone. Anyone who would intentionally put children in harms way should be locked up.

ADAM: Cops just left …. They will do follow ups …

COMMENTER: They say that but remember my stalker problem that broke in several times, breaking out windows and everything else to get in. They promised me they would be around to follow up and watch but didn’t happen! We are still going through the bullsh!t to get him behind bars! Just saying, can’t depend on them.

ADAM: I only made the report so its on log sheet I at least tried… I could only hope someone broke into my home… Then I can legally beat them with in inches of their lives 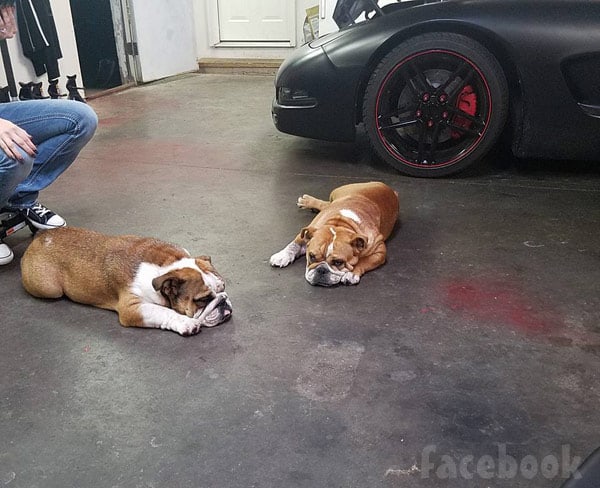 ADAM: I still have a strong feeling is randy … Chelseas dad … He’s always been a big fan of mine…takes so much time out of his busy day to update his own twitter and what not to talk about me…

ADAM: Yes he is…. Shits that posted on that page literally leads right to him Rita Chelsea or Cole … They r the only ones with info I’ve seen posted on there

COMMENTER: What a crock of sh!t. I think it just boils down to them being jealous of how much you’ve changed and bettered yourself and your life since you and Chelsea split.

ADAM: This was on my timehop the other day lol … Wonder if the feelings have changed at all? 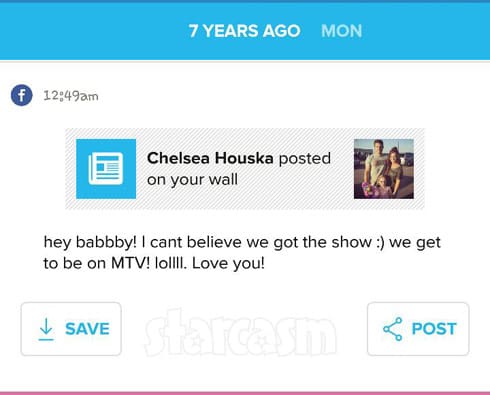 Want to see more Timehop photos of Adam and Chelsea as well as a bunch of questions and answers from her Formspring account before she was on MTV? Check out our profile post on Chelsea prior to her 16 and Pregnant episode airing back in 2010! Even back then Adam was not a fan of MTV. “f**k 16 and pregnant i did it for the cash 🙂 ” he wrote at the time.

UPDATE – The Instagram page that posted Adam’s address is currently suspended after being reported numerous times.

No matter what your thoughts are on Adam, it seems clear that posting his address was taking things a bit too far. I realize that the information was obtained via public records, but when information like this is shared with malicious intent, then that is a problem — and potentially a crime.

UPDATE – Dr. Randy Houska was a bit delayed, but of course he had a reaction: