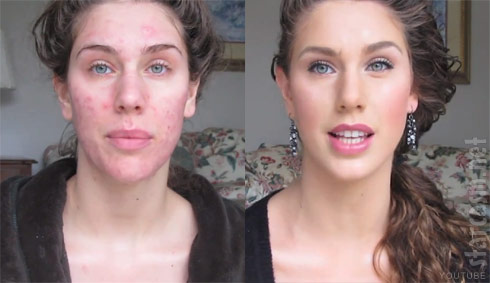 Cassandra Bankson starts every day like most teen girls by washing her face and putting on makeup. But for Cassandra, the process is an amazing transformation from an acne-ravaged teen to a nearly flaw-free-faced young model!

Cassandra suffers from very severe acne, with blemishes and scars that cover her face, neck, and parts of her back and chest. She admits that she is “the most self-conscious person about [her] acne” and so she spent hours and hours in front of a mirror perfecting her miraculous makeup application technique, which she then shared in a YouTube video that has well over 3.7 million views at the time of this post.

Here’s the clip in which a tearful Cassandra reveals to viewers her natural face before going through the step-by-step process of foundation, concealer, powders, and spray that lasts almost ten minutes:

The success of the video even landed Cassandra an appearance on Good Morning America where she talked about how surprised she was by the popularity of the clip. “It’s been overwhelming,” she said. “It really is an eye-opener. I never knew that for men, for women, even for adults, it’s such an epidemic. Yes, it’s cosmetic, but it goes deeper than that. I think that’s something that’s a little bit of a misconception.”

Here’s the preview clip for her appearance on the show:

During her interview Cassandra also talked about how she hopes the video will help teens in similar situations. “I know exactly where you are, I’ve been in your shoes and there is hope,” she said on the show. “Someone else has been there and there is a way for you to feel confident…you just need to kind of search around for what it is that makes you lighten up.”

Although the responses to her video have been overwhelmingly positive, there have been a few inevitable “haters” accusing Cassandra of being “fake” and overly obsessed about her looks. Fear of critics weighed heavily on Cassandra’s mind prior to posting the clip. “It took me a month to post. …I thought I was going to get the same hate as school for my skin,” she revealed on GMA. “I thought if it helped one person, one girl or even one guy who was in the same condition, it would be worth it.”

Kudos to Cassandra – that really is an amazing transformation! And according to her, she has been able to book numerous modeling jobs thanks to her adept cosmetic skills! And here’s a video of her modeling portfolio as proof. (Skip to the 1:32 mark for the rather impressive photos!) 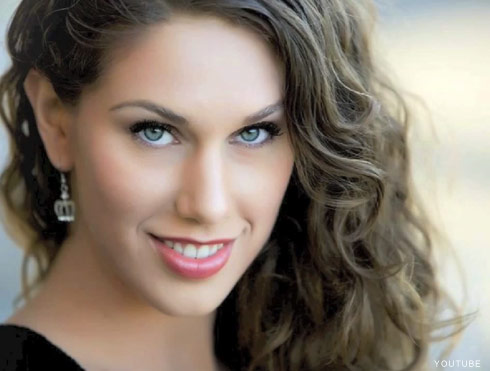