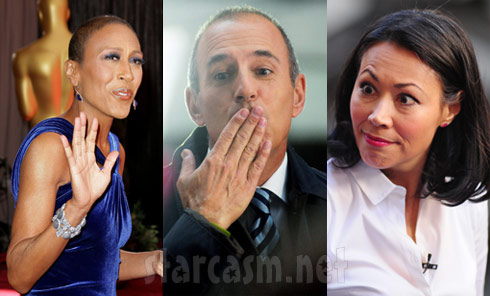 The fallout from Ann Curry’s Today departure seems to have no bottom as a recent report from the respected publication, New York Magazine, details just how embittered things became in the morning talk show wars.

In a cover story, reporter Joe Hagan revealed a particularly disturbing example of the lengths NBC was willing to go to keep their bread-winning show from being overtaken by rival Good Morning America in the ratings.

“Ann Curry was gone but not gone, which created a situation of spectacular awkwardness. Any trust that had existed between Curry and Today was shattered. When Robin Roberts left Good Morning America a month later to get treatment for MDS, Curry asked NBC if she could tweet a note of sympathy for the ABC co-host. NBC said no, afraid she was trying to aid the enemy.”

Ann Curry has remained mum about her dismissal from the show, also known as being a professional, while Matt Lauer has received the brunt of criticism for the unpopular move.

GMA has been consistently beating out Today in viewership and even CBS This Morning has seen its ratings increase. Via the latest summary from TVNEWSER for the week of March 11:

Lauer re-upped with Today for a reportedly cool $25 million a year. Recent rumors have circulated that he flirted with the idea of leaving NBC to do a daytime talk show with former co-anchor Katie Couric on ABC.

Is Matt Lauer going to be replaced by Anderson Cooper?