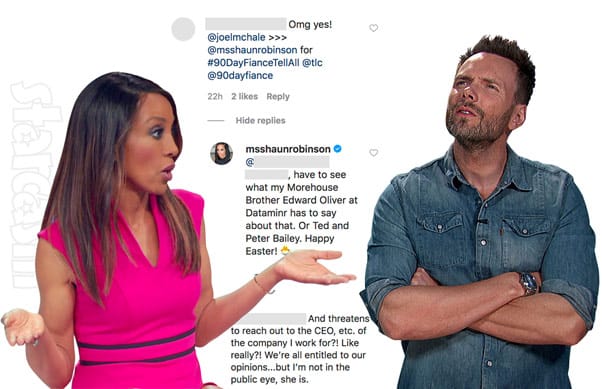 Joel McHale is receiving a lot of praise for how he handled hosting the newest Tiger King installment on Netflix. An Instagram account dedicated to the 90 Day Fiance franchise and My 600-Lb Life was among those doling out the love, sharing a photo of Joel and asking: “Can this guy do all the Tell Alls from now on?” (Original post embedded below.)

A fan concurred by stating in the comments that Joel would be better than current Tell All host Shaun Robinson. Shaun herself responded to the assessment by suggesting that she will have to see what the fan’s bosses would have to say about his opinion — and she mentioned his bosses by name!

Here is a full recap of how all the meta host drama played out:

@youresolazy shared a photo of Joel McHale asking if he could be the host for all future 90 Day Fiance Tell All specials. “Omg yes!” a man responded, before visually quantifying his opinion with: “@joelmchale >>> @msshaunrobinson for #90DayFianceTellAll.”

Shaun Robinson responded to the comment by writing: “[Commenter’s first name], have to see what my Morehouse Brother Edward Oliver at Dataminr has to say about that. Or Ted and Peter Bailey. Happy Easter! ?”

The man responded to Shaun: “@msshaunrobinson ?Happy Easter to you too! How is that relevant though?! Joel McHale is a funny guy. And you both are in the ?public eye. I was making suggestions on ?spicing up the Tell All’s…but regardless, Netflix should renew his show.”

Later in the day, @youresolazy shared a screen cap of Shaun’s comment and wrote: “When Ms. Shaun Robinson shows up on your IG feed” with a ? emoji.

The commenter that Shaun was responding to added: “And threatens to reach out to the CEO, etc. of the company I work for?! Like really?! We’re all entitled to our opinions…but I’m not in the public eye, she is.”

@youresolazy was taken aback. “Wait what??? Are you serious?? I didn’t know what she was talking about. She was threatening you for saying someone else should host the Tell All???”

The commenter replied by confirming that is exactly what happened. “Yup. The latter of the 2 names she mentioned are C-Levels at the company I work for…the first name she mentioned is a Sales Exec. ?”

As you can probably tell from Shaun’s comment, the commenter works at Dataminr, which offers “real-time AI for event and risk detection” and employs “nearly 650 employees across seven global offices,” according to the company’s website. Shaun name drops fellow Morehouse College graduate Edward Oliver, who is Dataminr’s Vice President of Customer Success. She also mentions Ted and Peter Bailey, who are the Founder and CFO, and Chief Strategy Officer respectively.

I checked the Twitter account of all three of the men Shaun mentioned, but so far none of them have commented on their employee’s suggestion that Joel McHale would be a better Tell All host than Shaun Robinson. I’m guessing they won’t fire the guy for thinking that, but stay tuned! ?

Here are the original posts that spawned all the meta drama: