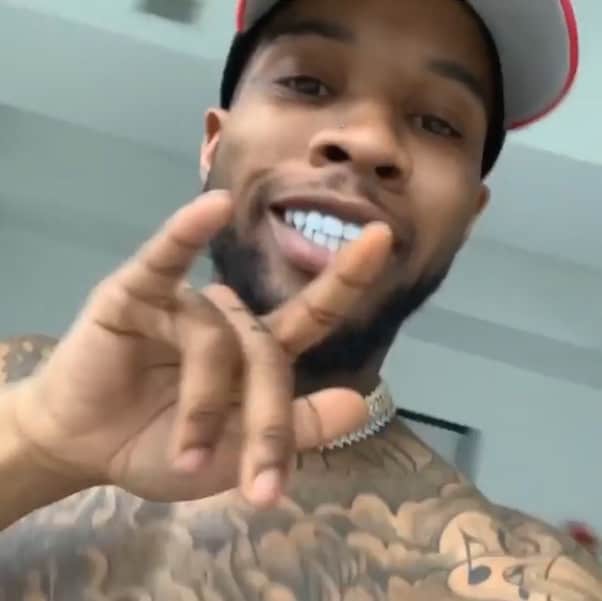 The head of Instagram has already acknowledged that IG banned Tory Lanez for a non-existent rules violation. So when is Quarantine Radio back? And what will Tory do now that he (maybe) can’t feature twerking any more? For one thing, we know the 27-year-old pandemic phenom isn’t sweating it — he just dropped The New Toronto 3, his latest album while building up anticipation for his IG Live return.

As we reported last week, Tory Lanez now holds the record for most IG Live viewers at one time. Tory and crew damn near crashed the platform during a twerk solo from former Basketball Wives star and overall booty legend DJ Duffey, who famously dropped trou to twerk in a thong. (Duffey also got #QuarantineRadio trending #1 on Twitter at the same time.)

All told, there were around 310,000 people tuned in when Instagram pulled the plug. Tory revealed he’d been banned from doing any more live events for at least a week. But the banning didn’t come with an explanation. So Instagram CEO Adam Mosseri had to address the banning publicly, which he did during an interview with The Shade Room a few days ago.

Here’s what Adam had to say (via Revolt.tv):

Quarantine Radio is great, so first, shoutout to Tory Lanez on that. Quarantine Radio is not banned [for good]. The Lives have been great, the Lives with the fans have been great. But you can’t have nudity. That’s part of our community guidelines, part of our community rules, and we can’t make exceptions. On a couple of those Lives there was nudity, so we had to stop the Live. There’s a short period of time where you can’t go Live again, and we have to stick to the rules, otherwise why do we have them? But, generally a big fan of Tory Lanez, big fan of Quarantine Radio, and I hope it comes back soon, but just no nudity!

Mosseri didn’t say exactly when is Quarantine Radio back, nor did he bump up Tory’s date due to popular demand. But unless someone else got fully nude during the last broadcast — Love & Hip Hop star Alexis Skyy also twerked, but doesn’t appear to have gone top- or bottomless — I must say, that’s a pretty absurd enforcement of a definitely absurd rule. DJ Duffey didn’t show any more ass cheek than a racy bikini model — something you don’t have to look very hard to find a lot of on Instagram. And let’s not even start with some of the thirstier traps whose posts never get taken down.

People smarter than me & with more research on their side have made the pro-nudity-on-Instagram argument before, so I’ll stop there. Back to the immediate stuff: When is Quarantine Radio back? Tory’s promised a huge return tomorrow, Tuesday, April 14th.

As for The New Toronto 3, it’s available for streaming right now.

(Photo credit: When is Quarantine Radio back via @austin_showtime on Instagram)