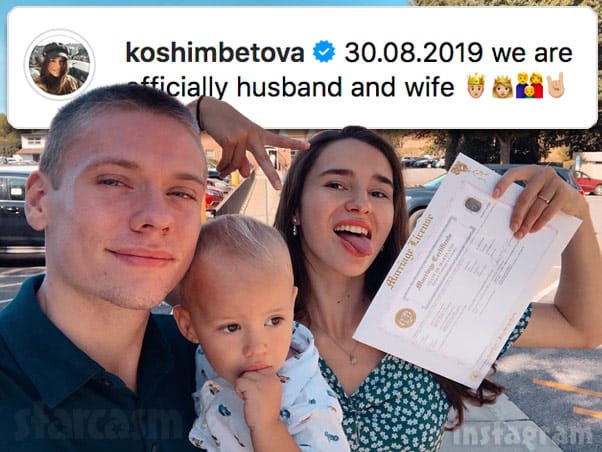 Congratulations are in order for 90 Day Fiance couple Steven Frend and Olga Koshimbetova as the couple just revealed that they are officially married!

Olga made the announcement on her Instagram account earlier today. The Russian reality star shared a photo with Steven and their son Alex in front of a Maryland Circuit Courthouse. Olga is overly joyful as she proudly holds a marriage certificate.

Olga returned to the United States with Alex back in early June after finally getting her K-1 visa approved earlier this year. The family of three have been sharing some of their stateside adventures on Instagram, including an impromptu trip to New York City and a return to Ocean City where they first met.

“We made a small trip to Ocean City and stayed one night,” Olga revealed on June 26, along with a couple photos of Alex. “It was nice to see the place where we met and spent our first summer together. We had romantic dinner with slices of Tony’s pizza on the beach of ocean. Also we found out that Alex loves the ocean and swimming there. Maybe he will be a surfer ? who knows?”

The trip to Ocean City was almost exactly two years after they officially began dating, and Steven shared his thoughts on their June 21 anniversary:

Today marks 2 years together ♥️ has it been perfect ? No. But in reality all relationships do have there ups and downs, but staying together is what makes the relationship so very strong. I appreciate you Olga so much for staying patient with me while I found my way♥️ I was so lost without you here with me and now that I have you i never want to let you go. So here’s to 2 years down and many more to come ? I love you babychka.

Here are a couple more Instagram updates from the couple during Olga’s 90 days:

STEVEN – August 15 – Ever since my family? has arrived I have never felt more alive! All of these mix emotions, constant change with learning to be a father as well as a supportive partner. There are days I feel like I have no idea what I’m doing, if I’m even a good father but then I see how you look at me with so much happiness in your face and the little things you are starting to depend on me for.♥️ For example, every morning☀️ even if it’s for 10-15 minutes or an hour I always try to take Alex to park alone at least 1 time during the day so that he has something to look forward to and I get a sense of father/ son time, sometimes in the morning he will grab his shoes ? waiting to go.? I can not wait to show you the world Alex ? – Qotd✨ – What are some activities you do with your toddlers? I’m still new into learning the things that would be very fun for him ! What about things for him and I ? 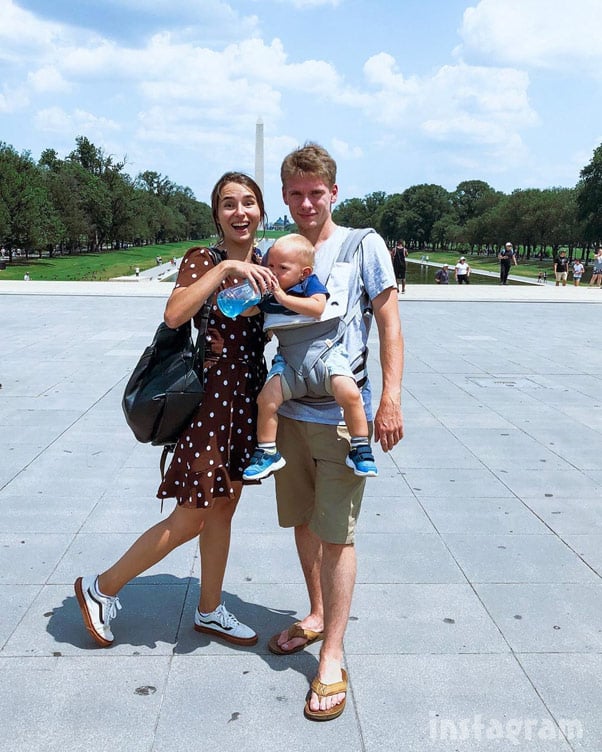 OLGA – August 21 – So guys how are doing? For example me, im still on my adaptation mood ? One day I’m super happy next day I’m like a time bomb?

A few days ago I was talking with my aunt who moved to USA 22 years ago and she told one cool thing which helped me a lot. She said : imagine a tree which grows 22 years in a comfort zone and suddenly the tree have been moved to absolutely different zone. What will happen with this tree? And my aunt said that tree will be sick for awhile. It needs time to get used. I have no idea how long it will take me to feel comfortable here but at least for now I stopped asking myself what’s going on with me 🙂 And to help me to feel better I creat a little challenge for myself. i always wanted to do 3 splits so I gave myself 30 days to achieve my goal. (Today is 21th of August )If I fail I want you guys to come up with a funny task for me (challenge ) so it will motivate me more ? So what do you think? Any ideas?

I was doing some research trying to confirm the marriage, but I was unsuccessful. (I assume there will be a slight delay.) However, I did find where Steven was pulled over for speeding on June 25 and was also cited for “failing to secure child under age 8 in child safety seat when transporting in motor vehicle.” ? Hopefully he learned his lesson after that!

CONGRATULATIONS to Steven and Olga! I know Steven rubbed a lot of fans the wrong way for a while there, but I’ve always believed that a lot of that was a prime example of the infamous 90 Day Fiance villain editing. I’m a big fan of these two, and I’m really hoping they are headed for a happily ever after! I’m also hoping that they are headed for Happily Ever After too. ? you reading this TLC?