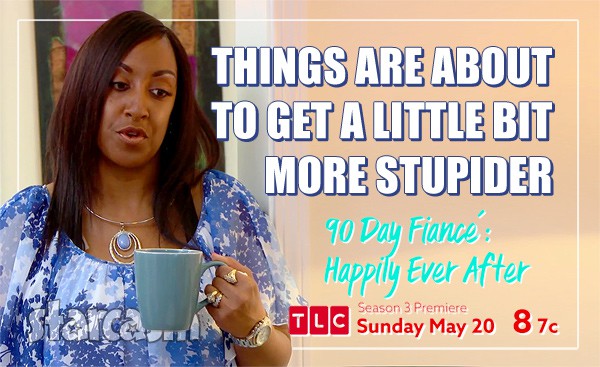 Yesterday we shared the first preview video for the brand new season of 90 Day Fiance: Happily Ever After, and now we have the official extended super trailer! And there are some MAJOR bombshells!

WHOA!! OK, here is a recap broken down into couples and arranged in descending order of shock value:

Paola and Russ – Paola takes a modeling job wearing body paint and Russ is probably uncomfortable with it. Later, we see the two still fighting over Paola’s guy friends, who are anything but #TeamRuss.

Nicole and Azan – Nicole tries on a wedding dress with her mom, something that happened in Florida prior to her return to Morocco. Later we see her confront Azan over an audio recording in which he allegedly talks with another woman about kissing.

(There have been numerous reports that Azan is quite the ladies’ man, with one alleged ex talking at length about her relationship with Azan while he was supposedly dating Nicole. Her account has not been confirmed, but it sure is entertaining!)

David and Annie – It looks like there is still tension between David and his family, and between David and Annie. In one scene that I’m sure fans are dying to see, David’s daughter confronts Annie over rumors that David met her at an “escort bar.” After that question, we see Annie say: “I have to support my family.” (This is purely speculation, but I predict that when we actually see the full scene that we will realize Annie’s comment was taken out of context. I simply cannot imagine that she would admit on TV to working in an escort bar!)

Chantel and Pedro – LAWDY LAWD! 90 Day Fiance producers know ratings gold when they see it, and that is exactly what Chantel’s family is! It appears as though Chantel and Pedro’s story lines this year will be handed over to #FamilyChantel, including private investigator-worthy paranoia, fisticuffs, and meme-worthy quotes like “Things are about to get a little more stupider.” (I would watch the entire season just to see Chantel’s brother River’s hair get into a fight!)

Molly and Luis – Well damn! It looks like TLC was actually able to get Luis to sign on for additional filming, despite Molly filing for divorce and his resentful comments and legal threats!

For that reason alone, this ranks second on my list of shocking revelations from the trailer. Otherwise, I don’t believe for a second that Molly gave Luis a second chance, and I’m not really looking forward to their segments this season. But who knows? #Molluis has surprised me before!

Jorge and Anfisa – Jorge may have a baby momma?! I suppose it could be argued that my shock is not merited here given that last week Anfisa posted on Instagram about a woman claiming to have a child by Jorge and asking him for money, but I’m still processing the information and it’s all lumped together in my brain. There was a great deal of speculation among 90 Day Fiance enthusiasts that Anfisa’s Instagram outburst against Jorge (in which she also accused him of “cheating” with late comedian Stevie Ryan) was a PR move to stir up interest in the new season, and I stated that if that were the case, then we would be seeing a trailer referencing it within a few days. Well…

One thing appears certain — Jorge definitely has a type! It seems that every woman he has slept with likes to talk in all caps. Perhaps my favorite moment in the trailer (and there are soooooo many great moments!) is when the woman is screaming at Jorge over the phone about taking a DNA test and we get Anfisa’s reaction to her competition: 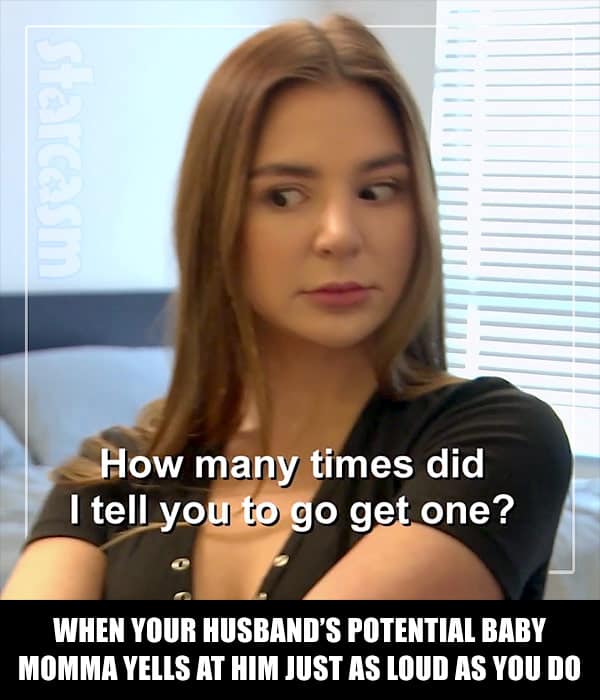 You can see lots more Anfisa eyerolls, frauded lovers, and international intrigue when 90 Day Fiance: Happily Ever Season 3 premieres on Sunday, May 20 at 8/7c on TLC!

UPDATE – Here is the official scoop from the TLC press release announcing the new season, including a brief synopsis of what viewers can expect to see from each of the couples:

Just when you thought you knew some of the most talked about couples of the 90 Day Fiancé franchise, they’re back with more drama, tears and ultimatums. We’ll check in with them when season three of the hit spinoff series 90 DAY FIANCÉ: HAPPILY EVER AFTER? premieres Sunday, May 20 at 8/7c. These couples had 90 days to marry their foreign-born fiancés or return home. Most of them sealed the deal, but they’re realizing that the hard part is far from over. Nine two-hour episodes will end with a two-part Tell All where we’ll hear from the couples on everything that went down this season.

As they continue to navigate their lives together in America, the six couples we’ll follow this season include:

Jorge, 27 (Los Angeles, CA) and Anfisa, 22 (Russia)
Following a break up and a nasty confrontation at last season’s Tell All, Jorge and Anfisa are living separate lives. Jorge, still feeling resentful, considers filing for divorce, even though it means that Anfisa could be sent back home. Anfisa is working on building her life in America and insists that she will remain in the U.S. no matter what happens. But then someone from Jorge’s past shows up claiming that Jorge is the father of a ten year-old girl, making Anfisa more angry that his finances might not have been the only thing he lied about.

Nicole, 24 (Bradenton, FL) and Azan, 25 (Morocco)
Azan is gearing up for his K-1 VISA interview at the U.S. Consulate in Casablanca, Morocco. He and Nicole are hoping everything will be approved so that they can finally begin their lives together in America and get past this roadblock that has prevented them from moving forward. Nicole’s family is still skeptical of their relationship, and while Nicole urges everyone that she wants to be taken seriously, Azan gives her new reasons to doubt her own trust in him.

Chantel, 26 (Atlanta, GA) and Pedro, 27 (Dominican Republic)
After two weddings, both in the U.S. and abroad, Chantel and Pedro worked hard to try and bring their families together, but ended up creating more of an unsettling feud between them. Money is a constant issue of angst while Pedro continues to focus on supporting his family back home but Chantel feels that they are not progressing financially. Still suspicious of Pedro’s intentions, Chantel’s family is looking to hire a private investigator to find out if their new son-in-law has any big secrets.

Molly, 42 (Woodstock, GA) and Luis, 27 (Dominican Republic)
After spending a few weeks apart, Luis eventually came home and Molly gave him a second chance. However, it’s obvious that Luis is still not ready to step into a fatherly role to Molly’s two daughters. Molly’s eldest daughter Olivia openly does not approve of Luis and decides the only way to deal with her new normal is to leave. Will Molly continue to try to make Luis into the man she wants him to be?

Russ, 31 (Oklahoma City, OK) and Paola, 30 (Colombia)
After being in Miami for nearly a year, Paola is finally happy with her budding career and strong group of friends. Then, a call from back home rushes Paola and Russ to Colombia when they hear that Paola’s sick grandmother is not doing well. Once there, Paola’s family confronts her about feeling like she’s disappeared from the family, and blaming Russ for taking her away. Paola’s family isn’t the only one unhappy with Russ, things get heated between Russ and Paola’s best friend Juan and Russ tells Paola she must choose between the two of them.

David, 49 (Louisville, KY) and Annie, 25 (Thailand)
After being cut off for good from his friend Chris, David and Annie are still struggling financially. David tries to rekindle his relationship with his children after being out of the picture for years, but it’s not the sweet reunion that he hopes for. His children don’t welcome Annie with open arms and she’s not receptive to them either. Annie continues to realize that her image of the sought after American dream isn’t what she thought it would be, as she spends her days stuck at home and doesn’t know if she’ll be able to make it in the U.S.