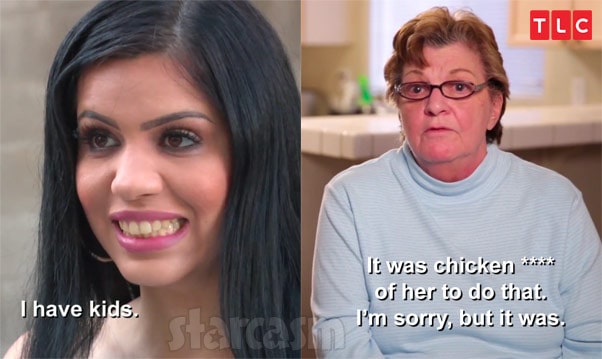 In an emotional preview clip for this week’s episode of 90 Day Fiance: Happily Ever After, Larissa dos Santos Lima reveals to her mother-in-law Debbie that she has children back in Brazil. The news hits Debbie hard, and she tears up before walking away and declaring: “I need a drink.”

However, Larissa seems to ease the pain that Debbie is feeling over not knowing by explaining her reasons for waiting so long to tell her.

“Debbie, I have something to say to you,” Larissa begins. Things get quiet, and Debbie seems nervous when she responds: “OK?”

After another pause, Debbie takes a guess. “You pregnant?” she asks.

“I have kids,” Larissa says flatly.

“You have children?” Debbie asks. Larissa says nothing and Debbie begins to tear up. She gets up from the table and goes back inside the house through the sliding glass doors. When in the kitchen, Debbie says out loud: “I need a drink,” before taking a swig of something from a very large mug.

“I am shocked,” Debbie says in a voice over. “They haven’t told me anything about it. I am so angry with her because it’s our family — I need to know what’s going on. It was chickensh*t of her to do that. I’m sorry but it was.”

Debbie returns outside and sits with Colt and Larissa again. “I’m a little disappointed that you guys didn’t tell me,” she admits to them both. “It’s hurt me because no one has discussed it with me. Bring me in the conversation.”

Larissa cuts her off. “I always wanted to tell you, but it’s a complicated situation,” she explains. “In the beginning, we don’t get along. So, every time that I see the way that you take care of Colt, everything… I thought, ‘How will I explain to you that I have kids in Brazil?’ I was afraid. I love Colt, so what will his mother, that did everything for him, will think about it?”

Larissa’s explanation seemed to have a positive effect on Debbie, and we then hear Debbie’s voice over: “When Larissa told me the way she felt about me, I understood why she didn’t tell me about having children. She was scared, and I don’t think she trusted anybody.”

The fact that Larissa has children in Brazil may come as a shock to casual viewers, but it was reported late last year, and Larissa confirmed the reports in November. In a series of angry posts, she admitted that she had a son with her ex Marcos Hack, and a younger daughter that is now living with Larissa’s dad.

Here’s an excerpt from her posts:

Yes, I had a relationship before with Marcos Hack, we lived for 2 years together. When our son was a baby, I found out that Marcos was a crossdresser and bisexual, he was cheating me with many other men. He broken my heart in many pieces back there, I got really depressed. I found myself unable to take care of our son and his sister adopted him.

I also have a daughter, from another relationship, who lives with my father and who I plan to bring to United States one day when I am ready to take care of her.

Larissa later shared more details about her children in a lengthy, less angry post, and included that she hoped to bring her daughter to the United States eventually:

My father is a retired military man and he and his wife are great grandparents, they have a lot of time for her, I talk to them everyday on whatsapp and I plan to bring her to live with us very soon.

I wanted to try my life here with Colt first, I want to move to a “Biggie house” and make sure the relationship will work out before I bring her.

I also want to open my business to be able to support my daughter.

Along with her statements, Larissa also posted photos of her two children (with their faces hidden), as a well as an image of herself pregnant: 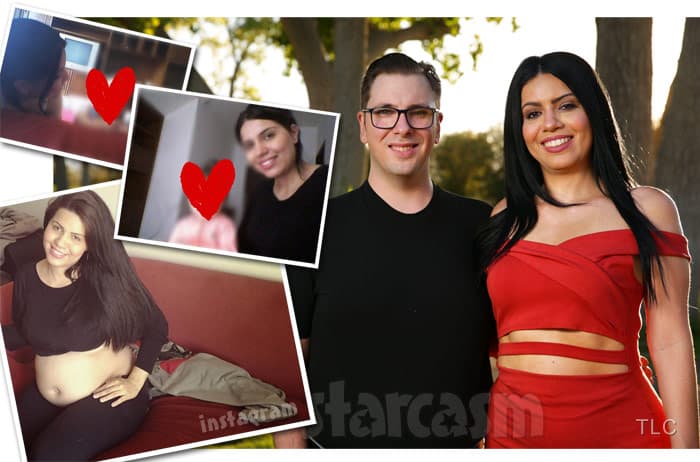 The initial reports about Larissa’s children came from a friend of Larissa’s ex Marcos. That friend talked about Larissa’s son and daughter, but she claimed that Larissa has a total of three children. Larissa did not mention a third child in her responses, but she also did not deny it when addressing the reports. Perhaps Larissa will clarify exactly how many children she has on the show?

(UPDATE – TLC has since shared the video on YouTube and they specifically titled it “Larissa Reveals She Has Two Children in Brazil.” I have swapped the clip to the YouTube embed above.)

If you are curious about the timeline, and whether or not the scene with Debbie may have been staged after Larissa shared her admission online, the dates do seem to suggest that the scene with Debbie was well before Larissa’s posts. Larissa’s first domestic violence case was dismissed in the previous episode, and that happened on October 2 of last year. Larissa wouldn’t admit to having children online until more than a month later.

You can see the full scene with Debbie, Larissa, and Colt when 90 Day Fiance: Happily Ever After airs Sunday night at 8/7 c on TLC.