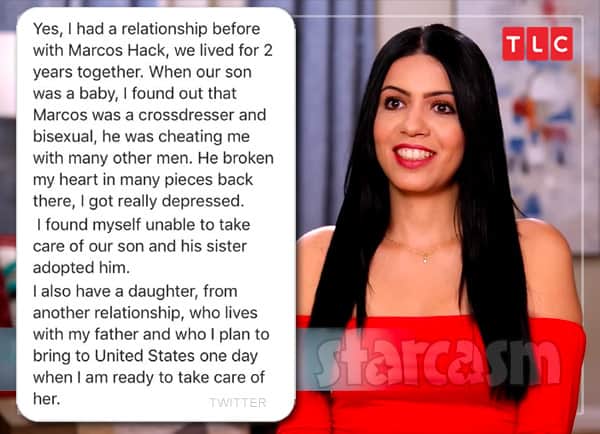 It has been a tempest of a week for 90 Day Fiance star Larissa Dos Santos Lima. The 32-year-old Brazilian was arrested on Saturday and charged with domestic battery after an alleged altercation with her husband Colt Johnson, and after a series of concerning Instagram posts made by Larissa asking her followers for help. In the wake of her arrest, it was discovered that she was previously arrested for domestic battery back in June, a charge which was later dropped.

Soon after her arrests made headlines, a woman named Maria tweeted that she knew Larissa and claimed that the reality star has three children by three different men back in Brazil. “I met Larissa in Brazil 5 years a go,” Maria wrote. “She was dating my best Friend the father of her son. She has 3 children. that she left behind. My friend have a custody of the middle one. The oldest is with the father and the little one is with her father.”

There was information online that seemed to back Maria’s claim, including two different birth announcements as well as photos of Larissa’s father and another of Larissa’s alleged ex Marcos raising a young girl and a young boy respectively.

After initially encouraging folks to ignore claims being made about her online, Larissa messaged John Yates and confirmed that she does have two children — one with a man named Marcos Hack, and another that her father is now taking care of. (She makes no mention of a third child, as claimed by Maria, which would be younger than the other two.)

Yes, I had a relationship before with Marcos Hack, we lived for 2 years together. When our son was a baby, I found out that Marcos was a crossdresser and bisexual, he was cheating me with many other men. He broken my heart in many pieces back there, I got really depressed. I found myself unable to take care of our son and his sister adopted him.

I also have a daughter, from another relationship, who lives with my father and who I plan to bring to United States one day when I am ready to take care of her.

Marcos also stolen 20 k from my credicards, he left me without credit and without a job. It is the reason I had to give my son to his sister. He is a loser, just an user looking for 15 minutes of fame. I was not talking about my kids because the show is 90 days fiance it is not about my past or my children.

I ask people to respect their privacy and I wont talk about them ever again. Just for the record, I am posting one of Marcos Hack pictures, this is just one of many pictures that I found on his phone. [The two photos included looked to be men dressed as women on a bed.]

Larissa continued her attack on her son’s father in a series of texts:

Larissa’s ex Marcos Hack seemed shocked when his Instagram account became inundated with friend requests, and he later confirmed that the Twitter user named Maria was his close friend and that everything she stated was true:

I want to address this story about Larissa and I.

Yes it is true, Larissa and I had a relationship years ago, and we had a son together. 7 months after he was born she left him with me. My son Any is the light of my life.

Everything my great friend Maria Kamke from Sarasota Fl posted is true. I don’t want to expose my son or my family to the public, but people need to know who the real Larissa is. Thank you.

Larissa mentions that it is her plan to bring her daughter to the United States “one day when I am ready to take care of her.” Prior to her father making his Facebook page private, I scrolled through tons of photos of Larissa’s daughter and other family members dating back years, and Larissa was not in any of them. That includes the little girl’s christening, which looks to have taken place in September of 2017. (That doesn’t mean Larissa wasn’t there, but she was definitely not included in any of the photos her father posted.)

The topic of how much interaction Larissa had with her daughter prior to leaving Brazil was not addressed in her messages with John Yates, but I assume that a mother looking to eventually take custody of her child back from the child’s grandparent would at least be part of the child’s life to some degree prior to taking her away to another country.

Larissa also states that her ex Marcos is a “loser” and a “user looking for 15 minutes of fame,” but he sincerely seemed blindsided by the whole thing. Perhaps he might try to garner more attention going forward, but he certainly didn’t seem to be looking for any attention before.

Unfortunately for Larissa, I don’t think she will be able to avoid being villainized by the show’s fan base after news spreads that she has children in Brazil. I’m one of the many that was a big fan of her brashness and sense of humor on the show — but those two things won’t play nearly as well with viewers moving forward.

The term “train wreck” gets used often when talking about the 90 Day Fiance franchise, and I am fearful that Larissa and Colt are headed for a serious version of that soon — but not in an entertaining way. Both Colt and Larissa are still active on Instagram, so it appears as though they will attempt to weather the oncoming storm. Colt seemed to say as much with his most recent Instagram drawing, which substitutes a cat for Homer’s soldier in the famous quote from the Odyssey used as the caption: 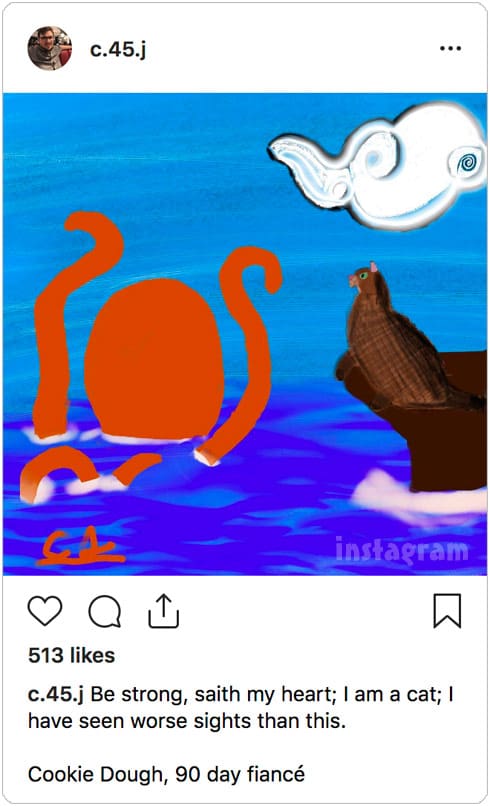 I certainly wish Colt, Larissa, and Cookie Dough all the best on their own reality show — and real life — Odyssey in the coming months!

90 DAY FIANCE Are Noon and Kyle returning to TLC for Happily Ever After or The Other Way?