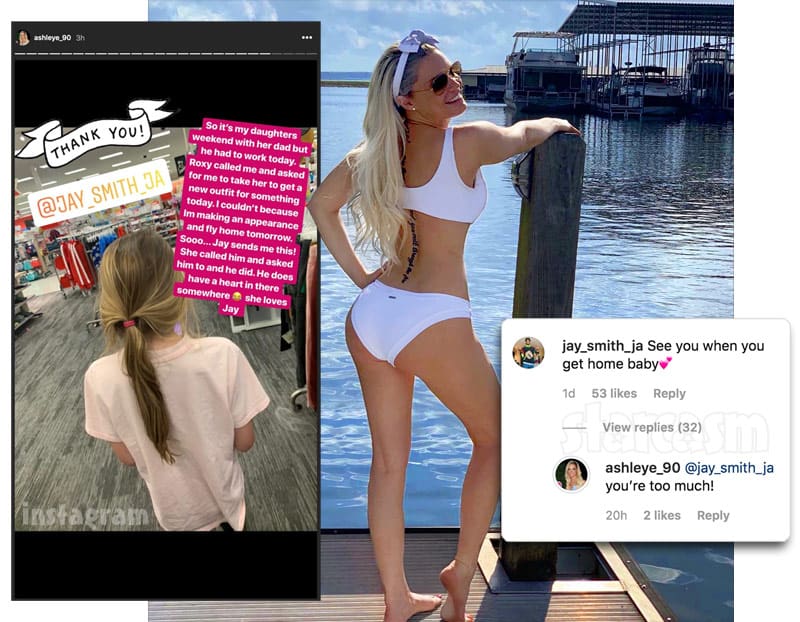 90 Day Fiance: Happily Ever After star Ashley Martson is currently in Houston, Texas, where she has been proudly showing off her revenge body in a series of Instagram bikini photos. But it might actually be her reconciliation body, as she jokes around with Jay in the comments, and later reveals that he is watching her daughter back home in Pennsylvania!

We will start with the bikini photos, which Ashley captioned by writing: “She acts like summer and walks like rain…”

In the comments section, Ashley defended herself against some plastic surgery accusations, while confirming others.

“She got Butt Implants!?” one commenter wrote. “I’m flattered you think my ass is fake. I got it from my mama,” Ashley responded. “My boobs… yah they are fake af.”

Speaking of “fake af,” Jay chimed in with a comment that seemed to suggest all is well between the two of them. “See you when you get home baby?,” Jay wrote.

Ashley rolled with the positivity with her response. “You’re too much!” she wrote.

Fast forward a day, and apparently Jay sobered up — because Ashley revealed in her Instagram story today that Jay is watching her daughter!

“Thank you!” Ashley wrote on a photo of her daughter Roxy out shopping, before tagging Jay’s Instagram account. She then explained what she was thankful for:

So it’s my daughter’s weekend with her dad but he had to work today. Roxy called me and asked for me to take her to get a new outfit for something today. I couldn’t because I’m making an appearance and fly home tomorrow.

Sooo… Jay sends me this! [referencing the photo Ashley’s daughter out shopping.] She called him and asked him to and he did. He does have a heart in there somewhere ? she loves Jay.” 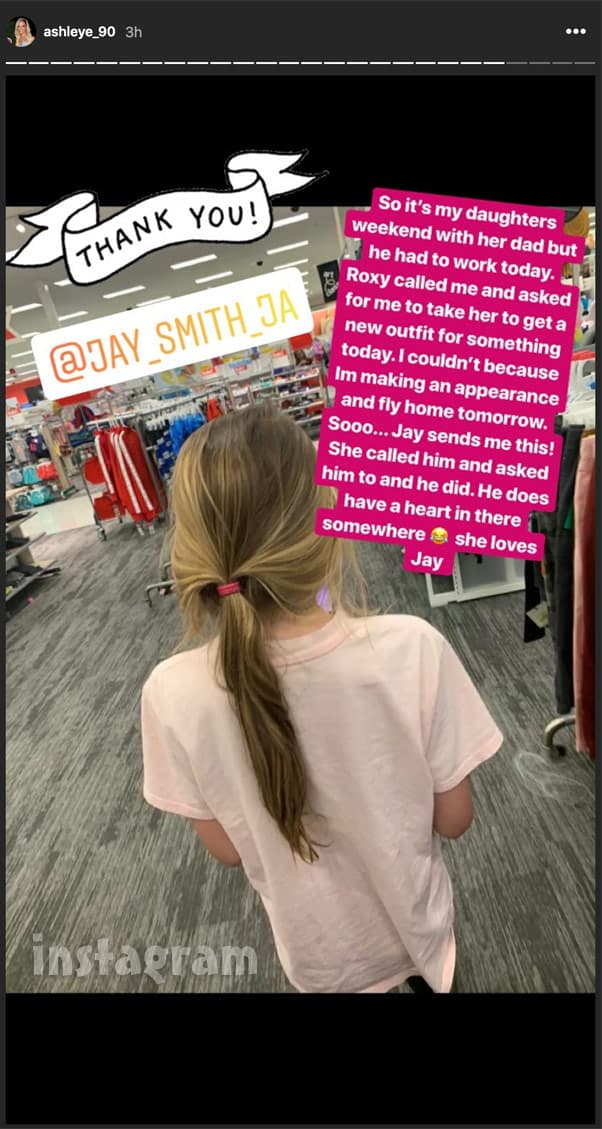 Perhaps we can officially start the countdown for Ashley withdrawing her divorce filing for the second time this year? On a side note, I believe Ashley’s daughter is 11 years old — which would put her closer to Jay’s age (21) than Ashley’s (33).

Ashley mentions that she has an appearance coming up, and that looks to be in reference to the Clé Houston day and night club‘s “Summer Sessions” event scheduled for today, May 26. There is apparently a pool party during the day, and then more regular club partying tonight. Kudos to Ashley for going out there and literally capitalizing in her fame! Doing appearances is certainly a lot more admirable than creating GoFundMe campaigns. 😉

So what do you think about Ashley and Jay’s relationship status? Take our quiz!

A. They are headed for divorce and nothing can stop that now

B. Jay is young and has a lot to learn. If he’s able to mature and change, there is still a chance for him and Ashley.

C. Most all of Ashley and Jay’s relationship issues have been 100% BS from the start. They are still together, and all the drama is just to drive up interest and create story lines for the show.

D. I am so tired of these two at this point that there is not enough “give a ?” left in my tank to even form an opinion.

If your “give a ?” tank is not yet empty in regards to #Jashley, be sure to tune in to new episodes of 90 Day Fiance: Happily Ever After airing Sunday nights at 8/7c on TLC!

Oh, and if the bikini photos have you curious what Ashley has tattooed down her spine, we’ve got the answer for you!