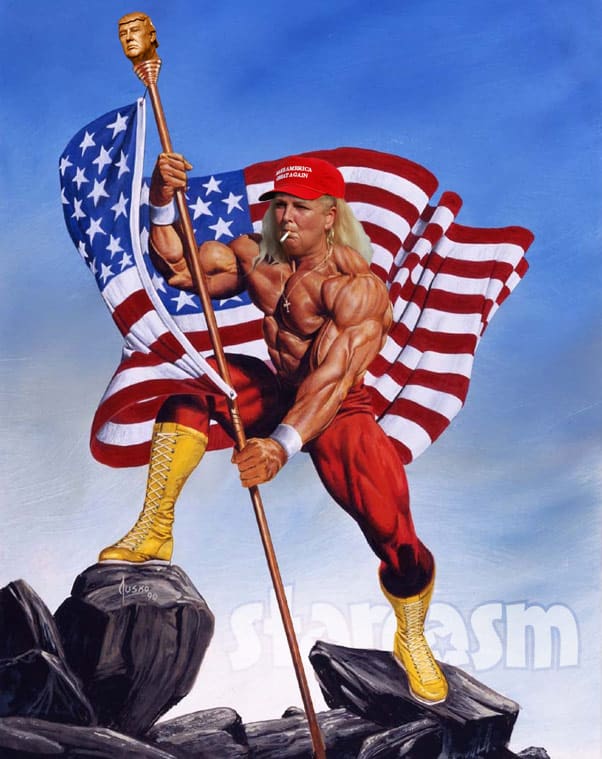 The cast of 90 Day Fiance: Before the 90 Days recently filmed The Couples Tell All Special in New York City, but fans won’t have to wait to find out some of what went down. Behind-the-scenes sources are leaking spoilers from the always-dramatic get together, and it sounds CUH-RAYZAY!

No one knows how to create more fireworks during a formal sit-down that 53-year-old Hazlehurstian Angela Deem, and Michael’s elder apparently delivered once again! According to Instagrammer @FraudedByTLC, Angela went after co-star Avery Mills. Their source says Angela was bullying Avery, including calling Avery “a very bad Muslim, among other things.”

Tensions escalated, and Angela then “attacks” Avery! “It becomes a huge brawl on stage,” @FraudedByTLC says. The altercation between the white rural MAGA-lovin’ Southerner and the converted Muslim teen from Ohio had to be broken up by someone experienced with bad relationships between Americans and Mediterraneans — co-star Rebecca Parrott.

Thank goodness for Rebecca, because I am guessing that Angela would have torn Avery to shreds. Of course, the whole thing could have just been Angela putting on a show for the cameras — which she has a lot of experience with, including last year’s Tell All as well as multiple appearances on Maury.

As crazy as the “brawl” sounds, I am guessing that the internet will be more obsessed with the reactions on the faces of the host (I assume) Shaun Robinson and the other cast members in attendance — which I am sure will be more than meme-worthy.

Speaking of the other cast members in attendance, the only non-American present for the Tell All taping was reportedly Darcey’s British beau Tom Brooks. That makes complete sense because no one who dates Darcey on the show would miss ANY opportunity for more screen time! To be honest, I’m kind of surprised we haven’t heard that Jesse Meester was also in attendance.

The other bit of tea from the Tell All also involved Avery, but that drama was the complete opposite of the Angela attack. The source says that during the Tell All taping, Avery began receiving messages from The Other Way‘s Aladin “telling her she looked beautiful in her hijab.” Avery was apparently not tempted to eschew her faith for potential jiggy jiggy because “she blocked him.”

In addition to the Tell All tea, @FradudedByTLC shared some behind-the-scenes info from the season:

A production source also reveals that the scene in which Laura’s son Liam refuses to meet Aladin’s family just after arriving in Qatar was misleading. “He did not refuse to meet Ala-din’s parents. He immediately went inside and kissed them both. He then told them they had a beautiful home, even though he doesn’t speak Arabic.”

Hopefully that little scoop will help save Liam from the wrath of the 90 Day Fiance fanbase because his scenes from the last episode had a lot of former fans turning on him!

I want to give a HUGE shout out to @FraudedByTlc for the scoops! Their 90 Day tea has been spot on so far, so I feel confident that these Tell All spoilers are accurate. I hope their faucet keeps leaking because I simply HAVE to know what the reactions were to Caesar and Maria! Plus, there’s no way Tim didn’t say something that p*ssed somebody off, right?

Meanwhile, you can keep up with all the drama leading up to the Tell All with new episodes of 90 Day Fiance: Before the 90 Days airing on Sunday nights at 8/7c on TLC.