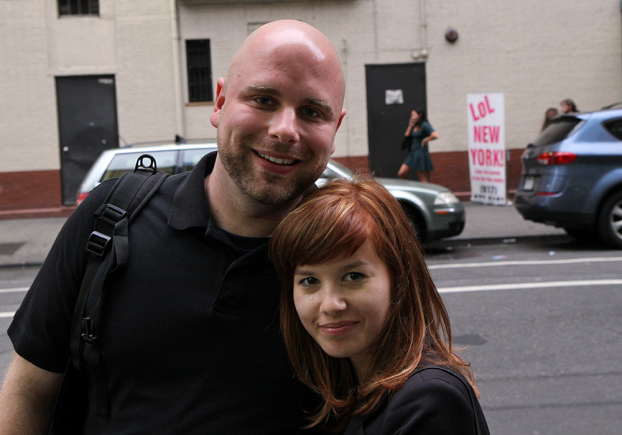 Congratulations to 90 Day Fiance season 1 couple Aziza and Mike Eloshway, who just announced that Aziza is currently pregnant with their first child!

The pregnancy announcement came via a series of maternity photos featuring the diminutive Russian-born Aziza with her little-less-than-diminutive baby bump on display in a snug lacy teal dress. Aziza captioned the gallery by writing “Mom&Dad❤️2019?‍?‍?”

Here are all three photos:

Mike also shared one of the photos on Twitter, and he kept it short and sweet as well. “Coming 2019… ?‍?‍?” he tweeted.

Mike seemed to spill a little more tea on reddit, however, as he corrected a post titled “Aziza and Mike (Season 1) are having a niño!” by commenting the correction: “Niña*” In other words, Mike seems to be saying they are expecting a little girl!

In case you were trying to remember Mike and Aziza, here is their very first bio from TLC from prior to the series premiere:

Mike and Aziza met on an international language learning website. Mike wanted to learn Russian for an upcoming trip, and Aziza wanted to learn English. The site paired them up, and they began speaking to each other regularly online. Mike visited Aziza in Russia, and after spending 6 days together, the two decided to get married. As a full-time student, Aziza has never had to take care of anything but her studies. With Mike eager to start a family, Aziza will face a steep learning curve as she leaves the comforts of her familiar culture, sheltered life and studies for a new world filled with first experiences and a whole lot of pressure.

A redditor provided a rather snarky recap of their story on the show, to which Mike responded by pointing out (like many of the other cast members have over the years) that their story was heavily edited and manipulated by producers:

REDDITOR: She was the Russian girl looked terrified/disgusted by her husband and she wouldn’t eat the food his mom made. His mom accused her of being rude/anorexic. Then Aziza wouldn’t have sex with Mike until some other girl flirted with him and then she thought she’d lose him and put out. I thought she HATED him, but she might have just been shy in front of cameras.

MIKE: 5 years later and I’m still fascinated how we were portrayed. Other than her being shy about eating on camera, literally none of this is true. As far as the looks go, TLC made her dye her hair because they thought she would be confused for Kirlyam.

I’d like to send a HUGE CONGRATULATIONS out to the couple! If they have any lingering naysayers whose opinions were shaped by the couple’s story on the show, I think the proof is in the pudding in that they are still together after five years — AND having a baby together! I confess that I would love to see TLC revisit Mike and Aziza on Happily Ever After, but I’m getting the impression that the Eloshways might not be as excited by the prospect as I am.