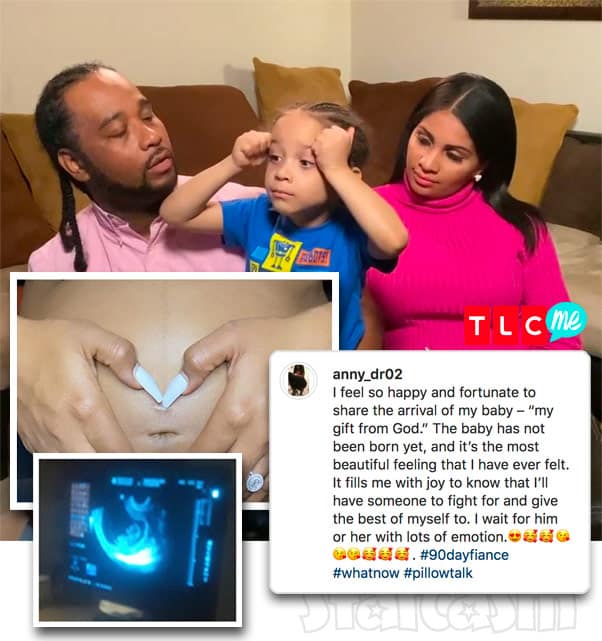 Break out 90 Day Fiance superstar Bryson is going to be a big brother! Season 7 couple Anny and Robert Springs officially announced that Anny is currently pregnant with their first child together!

The charismatic couple shared a joint announcement in a video posted by TLC Me earlier today. “We are having a baby,” the couple excitedly revealed in the clip. “Yes, we are expecting our first child,” Robert continued.

“When I first found out I was pregnant, I felt surprised because I first found out at two months already,” the Dominican mom-to-be said. “Like, I don’t know I have the baby, then I see the baby was already completely. I say, ‘Oh my god! The baby’s so fast!'” She then added: “I am excited for when I get my baby in my arms.”

Bryson joined the announcement video and Robert gave him a brief baby Q&A:

ROBERT: Bryson, are you excited to be a big bro?

Anny also shared a photo on Instagram that included her pregnant belly and a sonogram. Here is the photo followed by Anny’s caption:

I feel so happy and fortunate to share the arrival of my baby – “my gift from God.” The baby has not been born yet, and it’s the most beautiful feeling that I have ever felt. It fills me with joy to know that I’ll have someone to fight for and give the best of myself to. I wait for him or her with lots of emotion.?????????. #90dayfiance #whatnow #pillowtalk

So far, it doesn’t appear that Bryson’s “p0rn granny” Stephanie Woodcock (aka Diamond Foxxx) has responded publicly to the pregnancy announcement online.

The baby news may come as a bit of a surprise to some 90 Day Fiance fans after Anny revealed that she and her ex-husband had tried to have a baby, but she had fertility issues and they were unsuccessful. It seems that Robert’s “Fertile Myrtle” swimmy boys more than canceled out those issues!

Of course, the baby news won’t be a big surprise to serious 90 Day Fiance fans because @FraudedByTLC revealed the pregnancy waaaaaaaay back in February!

“A source inside production tells me that Anny is pregnant,” behind-the-scenes leakmeister Katrina wrote.

For fans wanting to know more about how the couple found out Anny was pregnant, that will be included in the couple’s episode of 90 Day Fiance: What Now? streaming this Sunday on TLC Go. #Robanny are also part of the new 90 Day Fiancé: Self-Quarantined spin-off airing later this month, so I assume fans will be able to get pregnancy updates by tuning in for that.

90 DAY FIANCE Did Natalie get a nose job? Before and after photos