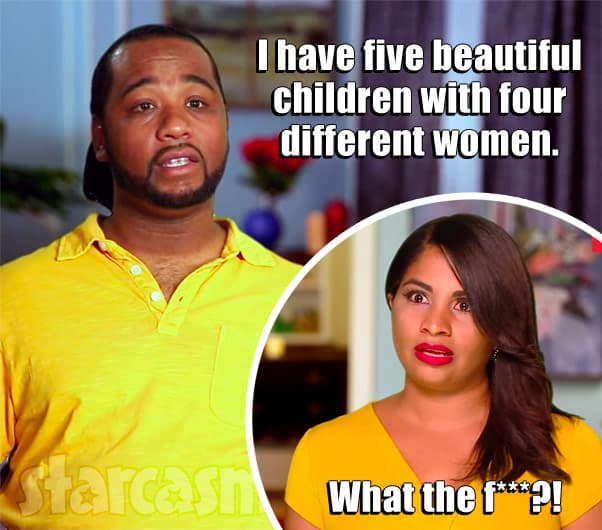 We thought we had some shocking news when we revealed a month ago that 90 Day Fiance Season 7 star Robert Springs has two more children in addition to his five-year-old son Bryson, who he lives with and is featured prominently on the show. As it turns out, our reveal was selling Robert Appleseed a bit short!

In a preview clip for next Sunday night’s episode, Robert announces: “I have five beautiful children with four different women.” His fiancée Anny is then shown expressing the same sentiment as most fans will when they hear Robert’s proclamation. “What the f***?” she asks incredulously.

Unfortunately, the preview clip was aired on the network and is not available online yet.

As we previously reported, Robert looks to have a son and a daughter who are a bit older than Bryson, but still school-aged. From our post:

Judging from Robert’s social media posts over the years, it appears as though he has two other children — a boy and a girl. Both of them are older than his son Bryson. Robert posed for numerous photos with his two oldest kids for years, but those almost completely dried up just a few years ago. The most recent photo of Robert together with his two older kids that I could find online was posted in December of 2016.

According to court records, the children’s mother filed for child support on May 11, 2015. On April 8, 2016, the Final Judgment on Petition for Enforcement of Administrative Order was filed.

In September of 2016, Robert filed a petition in family court, and a mediation agreement was reached on December 28, 2016. It’s unclear what the filing was pertaining to, but I am guessing it was likely in regards to the amount of child support.

That still leaves two children unaccounted for. I didn’t see any Florida court filings in regards to additional children, but Robert is originally from New York and I confess that I didn’t do a thorough search there. It’s also important to note that Robert is about to turn 42 in December, so it is very possible that his two other children are actually adults now.

I am hoping Robert will be sharing some additional info when he makes his reveal this Sunday.

DID ROBERT AND ANNY GET MARRIED?

Speaking of searching for Robert in Florida court records, I searched his home county today and still could find no record of him and Anny getting married. Because of Anny’s apparent fondness for Miami, I also searched Miami-Dade County and there was nothing there either.

Clearly, this is not any sort of proof that the two did not get married. But, given how poorly the couple is getting along, I’m beginning to wonder if we won’t be seeing the first 90 Day Fiance cast member to come to the United States after having his or her K-1 visa approved who doesn’t end up getting married!

I will keep snooping around for marriage records, but it looks like we’ll all just have to keep tuning in to new episodes of 90 day Fiance to find out whether or not Robert and Anny close the deal and get married, or if Anny decides that used clothes and sharing a bed with a five-year-old is too much.

We cracked open the #evuhdens binder on #90DayFiance's Robert and quite a few skeletons came dancing out, including a couple arrests, an eviction, and LOTS of baby mama drama! ???‍♀️ #SPOILERS https://t.co/giFpLxPpkC