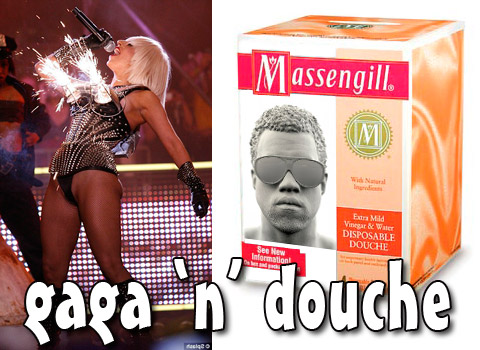 Kanye’s recent public display of jackassitude at the MTV Video Music Awards had some thinking he might cancel on the planned tour with Lady Gaga, especially after saying he needed to “take a break” on The Jay Leno Show the day after the VMAs.

But, the tour is officially a go! The details were released today in an official press release, including the fact that tickets will go on sale September 25th at LiveNation.com. The tour kicks off in Phoenix on Nevember 10 and comes almost full circle before ending in Dallas on January 24.

Here’s the full press release with most everything you need to know about the tour:

Los Angeles, CA (September 18, 2009) – Kanye West and Lady Gaga today officially announced dates for one of the most anticipated tours of the year ─ “Fame Kills: Starring Kanye West & Lady Gaga.” After months of planning, the multiplatinum artists will unite for 34 shows in 34 cities that will stretch musical boundaries with their distinctive performance styles and production. “Fame Kills: Starring Kanye West & Lady Gaga” will be produced by Live Nation. Tickets go on sale to the general public in select markets beginning September 25th at www.LiveNation.com.

In just five years, Kanye West has sold over 15 million albums worldwide, and garnered 30 Grammy nominations and 12 Grammy wins. His celebrated tours, including ’07’s groundbreaking and critically lauded ‘Glow in the Dark Tour,’ have played to more than one million fans the world over and have proven him to be a major touring force.

“Fame Kills: Starring Kanye West & Lady Gaga” is the follow-up to Lady Gaga’s sold-out international “Fame Ball” tour. Her album, “The Fame,” has sold more than four million copies worldwide, and her singles have sold over 25 million digital copies. Lady Gaga is only the third artist in history to have three #1 songs (“Just Dance,” “Poker Face,” and “LoveGame”) from a debut album.

Dates, cities and venues for “Fame Kills: Starring Kanye West & Lady Gaga” are below. Dates and venues are subject to change.

Gretchen Rossi is a singer now, releases single “Nothing Without You” for Jeff Bietzel