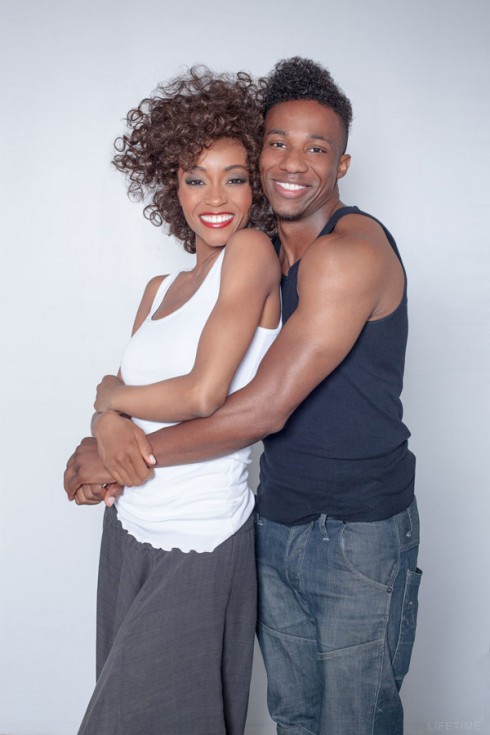 Last week we got our first look at actress Yaya DaCosta as Whitney Houston in the upcoming Lifetime movie biopic, and today the network shared the first photo of Bobby Brown, who will be played by actor Arlen Escarpeta!

In the photo we see Bobby and Whitney decked out in late-1990s glory as Bobby affectionately and playfully gives Whitney a hug.

The Lifetime movie, which has the working title Whitney, will focus on the story of Whitney and Bobby — a point elaborated on by the movie’s director, Angela Bassett, in a recent Entertainment Weekly interview. “I really just want to tell a story about a boy and a girl who fell in love,” Whitney’s Waiting to Exhale co-star said of the project.

We talked a good deal about Yaya in our previous post, but who is Arlen Escarpeta? According to his IMDB bio, “Arlen Escarpeta was born on April 9, 1981 in Belize, Central America as Arlen Alexander Escarpeta. He is known for his work on Final Destination 5 (2011), Star Trek Into Darkness (2013) and Friday the 13th (2009).”

The 33-year-old actor has also made numerous appearances on the small screen, with roles on The Shield, Judging Amy, Boomtown, ER and Cold Case.

Arlen seems super excited about having the chance to play Bobby:

Thank you @kingbobbybrown for setting such a high bar. I’ve been a fan since day one. #BobbyBrown

He also shared a rather stunning photo from the set:

Here are the main cast members starring in the Whitney Lifetime movie:

Whitney has already begun filming in Los Angeles and will premiere some time in 2015.

Bobbi Kristina’s family races home to be by her side

THE GIRL IN THE BATHTUB Mysterious death of Julia Law