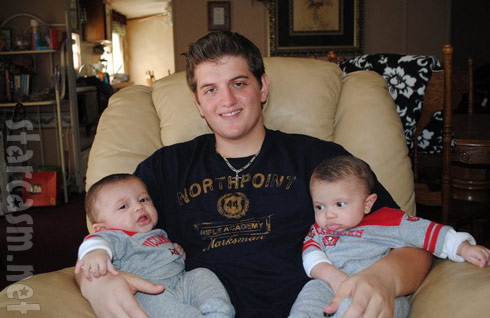 The drama continues in the tumultuous relationship between 16 and Pregnant star Jennifer Del Rio and the father of her twin boys Josh Smith. (Josh and sons Noah and Joshua are in the photo above) You might remember Josh from the Season 3 Premiere in which he was infamously hauled off in handcuffs after an altercation with Jennifer.

Since that arrest there have been a number of other headlines involving the couple, including multiple restraining orders, accusations that Jennifer got pregnant on purpose in an attempt to get on the show, another altercation that left Josh’s face bloody, evidence that Jennifer had a history of manipulation through pregnancy and even an intervention from Teen Mom 2 star Jenelle Evans.

As all this drama unfolds it’s beginning to appear as though Jennifer may be the bigger troublemaker of the two, with Josh looking a lot more sympathetic than he did in their episode – and that’s not even taking into account what has transpired over the last month!

The latest chapter in Jennifer and Josh’s dramatic story began a few weeks ago after Josh successfully got an injunction granting him custody of the children on weekends. According to Josh, Jennifer Del Rio’s mother picked up the injunction the following day to read it over and soon after that was when Jennifer, Joshua and Noah (Jennifer and Josh’s twin sons) vanished! Josh has heard numerous rumors about where they may have gone, including Chicago and Puerto Rico, but there has been no concrete leads.

Despite the disappearing act Josh did manage to serve Jennifer’s father with the injunction, so now they are officially in contempt of court.

“All I want is to be a loving father and spend time with my children,” Josh tells us. “I don’t like the fact that she is doing this but all I can do is follow the legal system and do everything I can to get my kids. I love them and I miss them very much.”

And Josh has done a great deal to insure that his boys have a stable home life with him, and is willing to take sole custody if it comes to that. “I have a great job and in good standing to be able (if i have to), to take care of my kids by myself,” he says.

This is an unimaginably tough situation for anyone to be in, but I admire Josh for taking the high road and patiently letting the cumbersome legal system run its course. Hopefully Jennifer will realize running away isn’t a solution and she too will step up and work this out with the father of her children – for their sake.

16 and Pregnant “Where Are They Now?” recap Season 2b