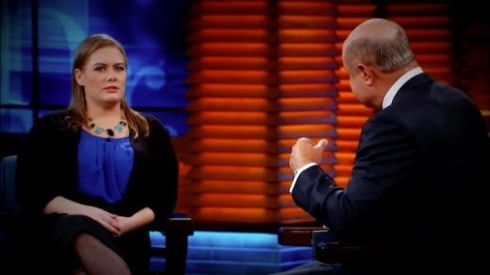 Some realities are too horrific to contemplate, but that doesn’t mean they don’t exist. “I didn’t know this wasn’t something that all parents didn’t do,” the now adult Amanda said on the Dr. Phil show about the sex crimes perpetrated against her from ages 11-13 by both of her parents. In a two-part episode (the second part airs today, November 17,) Amanda confronts both her parents about why they got her drunk and forced her to have sex with her father on camera when she was a preteen.

The first episode dealt mainly with Amanda’s mother, Justine, who seemed defensive and focused on explaining how life has been for her. She justified letting her husband rape their daughter by saying they didn’t call it “rape,” and that Jim would say it was so they could provide for their family and send Amanda to college with the money they received from selling photographs and video of Amanda online. Justine was usually operating the camera, and even appeared in several films along with her young daughter.

“I didn’t want him doing anything if I wasn’t there,” Justine says, trying to explain how she protected her young daughter during this time. “We ended up being arrested before I could tell Jim that it was over, wasn’t gonna happen again. I didn’t know what had happened behind my back. I found out in court.”

“You were supposed to be my mother,” Amanda said to her mom when face to face. Her mother defended herself by saying that she did say no and that she fought Jim about it. She also found it appropriate to start splitting hairs about the details. “You said from the age of 11? You were 12 when I was brought in,” as if her ignorance of a small amount of what happened somehow absolves her from the horrific abuse she did participate in.

Her mother taught her how to French kiss her father on camera by taking her into a room and making her kiss her. Amanda said the first time her parents forced her to have sex with her dad, Jim, they had to get her drunk first. After these encounters they would act like everything was normal. “Afterwards, it was a normal night, dessert, brush my teeth and bedtime,” Amanda said of the ordeal. Her parents would shower her with gifts and then threaten to take them away to prevent her from telling anyone.

Jim and Justine were convicted to 20 years in prison after a tenant found pictures on their computer and turned them in. Both of Amanda’s parents did about 15 years of their sentence. After her father Jim got out, he tried to contact Amanda on Facebook.