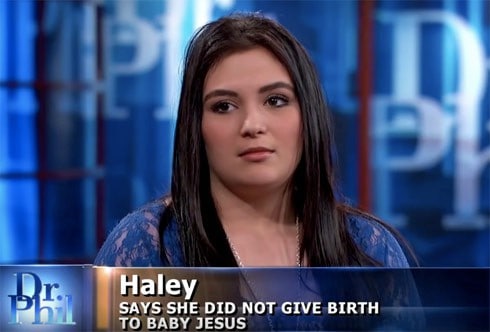 The teenage girl who made headlines when she told Dr. Phil that she was pregnant with baby Jesus and that Eminem was her father has changed her story. Well, she’s changed part of it anyways…

Haley, last name not provided, insisted that she was pregnant during her November appearance on the show. She maintained this belief in spite of two negative pregnancy tests and an ultrasound, administered by The Doctors host Dr. Travis Stork, that showed she was not pregnant.

Haley told Stork at the time, “You can’t lie to Jesus.”

Haley still insists that Eminem is her father. She even told the professionals at the treatment facility she was in that Dr. Phil was her uncle. When she gets pressed on this by the host she further complicates the narrative by explaining that Dr. Phil is also Eminem’s dad.

The 20-year-old completed two months of treatment but her mom feels that her daughter needs more help. In an explosive backstage scene, Haley yells at her mom when she’s confronted with the prospect of having to return to the same facility.

Haley tells a counselor, “It’s not going to go away. I have schizophrenia and that’s it.”