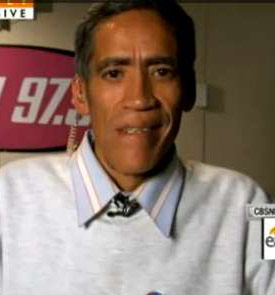 Golden-voiced former homeless man Ted Williams has had a smorgasbord of “golden” opportunities to use his amazing talent as a radio announcer since a video of him demonstrating his gift went viral. Even Oprah extended a job offer, but all the jobs, money, support, and success isn’t exactly what Ted Williams needs right now, because he’s still struggling with addiction.

The man, who came off as genuine and humble in the video that became an internet sensation, is still battling the problems that landed him on the streets and in jail at least 13 times in the past two decades. Now he is headed to rehab at the courtesy of Dr. Phil after an allegedly drunken altercation with his daughter.

Ted Williams was reunited with his ex-wife Patti and the children he had previously abandoned  many years ago (Tyrell, Tricia, Tangela and Jenay,) recently to tape a Dr. Phil show, and things quickly degraded at the hotel afterwards. Although he claimed to be two-and-a-half years sober and was denied access to alcohol at the hotel, he still managed to get drunk every night during his stay (according to his children.)

One night cops were called when he got into a physical altercation with his daughter Jenay. Here’s her accounting of what happened that night:

“What did he call you?” Dr. Phil inquires.

“‘You fat bitch,’ is what he said to me,” she replies. Then she says her father got physical with her. “He reached over and punched me in the side of my face, and I picked up an ice bucket and threw it at him. My brother, my sisters, my mother — everybody intervened to separate [us].”

Jenay told Entertainment Tonight that her dad had been drinking a bottle of vodka every night in addition to numerous beers. Here’s what she said to ET (via Cleveland.com):

Dr. Phil confronted Ted about his drinking, his lying, and his history of being a dead-beat dad. Dr. Phil used a police report from a very strange July 2010 incident to question Ted’s claims of sobriety.

“In July, the police were called, and you were over at a tire store in Columbus. They said you were pilfering cars, you had a woman out there who appeared to be soliciting for prostitution, you were urinating on the lawn, you became belligerent with the business operators when they asked you to leave, and you stripped down to your underwear. That doesn’t sound like the behavior of a clean and sober man of God to me.”

Ted reportedly denied the incident happened until the actual police report was shown to him.

Hopefully this intervention will help Ted cope with his past demons, and shore him up to deal with the pressures of his sudden fame. Becoming instantly famous doesn’t cure anyone’s deep-rooted problems. In fact, it usually creates new, bigger ones, especially if you have a history of addiction or mental illness. As Julia Roberts once said, fame doesn’t make you crazy, it just amplifies what’s already there.

Here’s to Ted taking responsibility for his past actions and being healthy enough to take advantage of the vast array of opportunities suddenly available to him.

LHHATL Tommie and Young Joc dating, but both have ulterior motives in mind