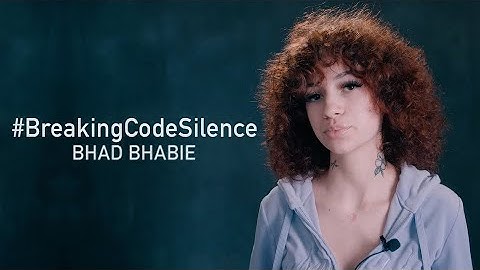 Bhad Bhabie is continuing her crusade against not only Turn-About Ranch, where Dr. Phil sent her when she was 13-years-old after her career-launching appearance on his show, but all facilities and programs like it. She recently debted a polished YouTube video, and then defended the video on social media. Her messaging about programs like this is that instead of helping the troubled teens who are sent to them, they end up further traumatizing already traumatized young people.

“The video I put out about Turn-About, it’s not about y’all liking me. I don’t give a f**k who the f**k likes me. It’s not about my hair, I don’t care if I had a f**kin’ 4C wig on. I don’t care about none of that . . . This damn sure ain’t about no f**kin money cause I ain’t made a dollar from this, nor would I accept a dollar from this cause this is not about money. I could make my money other ways. I don’t need money from this,” Bhad Bhabie said in response to some of the criticism she’s received about her popular video that has Turn-About Ranch and Dr. Phil in its crosshairs.

“This is coming from the kindness of my heart,” she elaborated about her motives. “And me being so passionate about getting places like this shut down because no one should go somewhere seeking help and leave with more trauma.”

In her initial February 2021 livestream speaking out against Turn-About Ranch (which she also published on her YouTube Channel) she was speaking out after she read an article about another woman, Hannah Archuleta, who is suing Turn-About Ranch over being punished for reporting sexual assault she experienced at the Ranch.

“In what appeared to me to be punishment for reporting my abuse, I was required to spend extra time picking up horse manure, walking in circles around a horse corral, and sitting at a desk facing a wall for hours. I also had to do forced labor outside in below-freezing temperatures, and sleep on a wooden plank with no pillow,” Hannah describes about what she went through after telling them about her sexual abuse.

Bhad Bhadie says she also experienced similar punishment at the ranch: for things like talking together in the bunks they shared, they were faced with punishments like “sitting outside in the cold, feeding us foods that they knew we didn’t like, make us pick up horse sh*t, make us walk in the arena for five days straight, not letting them shower or change their clothes.”

Bhad Bhadie, whose real name is Danielle Bregoli, said she didn’t think she showered at all for the two weeks she was there.

On March 19, 2021, Danielle published an interview-style video to project her message further. In the video Danielle issues an ultimatum to Dr. Phil to apologize to her, to Hannah Archuleta, and “to any other child that you sent to Turn-About or any other program like this, and if you don’t I’m gonna handle things my way.” She didn’t elaborate on what she meant, but Dr. Phil has until April 5, 2021 to respond.

In the video Danielle describes what it’s like to be taken in the middle of the night by “transporters.” She describes the experience as similar to kidnapping. After she arrived at the ranch, she says she was not allowed to sleep for three days.

Paris Hilton, who spoke out in 2020 about the abuse she suffered at a Utah boarding school, tweeted in support of Danielle’s video.

‘Cash Me Ousside’ girl is returning to Dr. Phil

Kim Richards to Dr. Phil: I was angry and frightened at the time of arrest