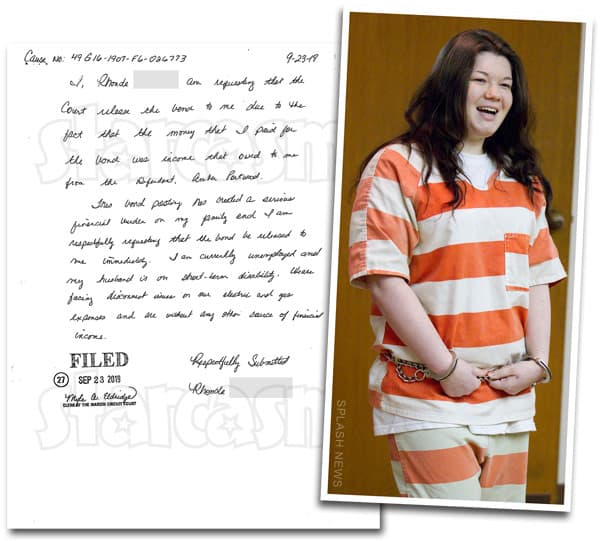 According to court documents, the woman who posted Amber’s $2,000 bond submitted a request for a refund! The request was filed last Monday by an Indianapolis woman named Rhonda. I am unaware of how she is connected to Amber.

“I, Rhonda [redacted] am requesting that the court release the bond to me due to the fact that the money that I paid for the bond was income that [is] owed to me from the Defendant, Amber Portwood,” the hand-written request begins.

Rhonda continues by explaining that “this bond posting has created a serious financial burden on my family and I am respectfully requesting that the bond be released to me immediately. I am currently unemployed and my husband is on short-term disability. We are facing disconnect issues on our electric and gas expenses and are without any other source of financial income.”

Unfortunately for Rhonda, asking for a refund is not how bonds work. The judge denied her request on Wednesday.

Clearly, the addressee of Rhonda’s request should not be the court, but Amber Portwood herself. If someone with financial hardships put up the Teen Mom OG star’s $2,000 bond, then Amber should be more than happy to repay that person. Perhaps that is what Rhonda was hoping for, and why she mentioned that Amber “owed” her the money?

Also unfortunate for Rhonda is that she is still at risk of losing her $2,000 if Amber violates the terms of her bail. That would most certainly include required court appearances, and possibly a couple of these common bail conditions listed in this comprehensive article about how bail bonds work:

We’re currently in the process of confirming that it was actually Rhonda who posted Amber’s bail, and we will update as soon as we have that confirmation.

It’s unclear when Amber will next be in court. There is a pretrial conference scheduled for October 10, but it is listed as “attorneys only” on the docket.

NOTE: The photo of Amber being jubilant and joyful while sporting orange prison stripes is from her previous arrest nearly a decade ago.

UPDATE – It was Rhonda that posted the bond, and we now have more information. Youtuber Without A Crystal Ball spoke with Rhonda and reveals that Rhonda is a former employee of Amber’s! She was reportedly in the house all the time for approximately three months and handled lots of things, including painting, cleaning, etc.

WACB spoke at length with Rhonda, who was clearly on Andrew’s side. Here are some bullet point highlights from the interview:

Here is the full video interview with Rhonda: