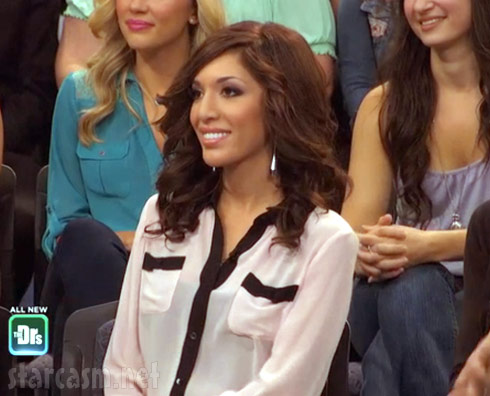 Former Teen Mom star Farrah Abraham continues her never-ending whirlwind post-sex-tape publicity tour with her latest stop being an appearance on The Doctors where she talked about her new line of sex toys as well as her parenting skills.

We have two clips from Farrah’s appearance on the show. In the first clip Farrah is asked about her new Topco sex toy line, which as you probably know by now, was molded from Farrah’s body. The second clip is a bit longer and focuses on the ramifications that Farrah’s sex tape will have on her daughter Sophia and how Farrah plans on dealing with the inevitability that Sophia (and perhaps more importantly, Sophia’s friends) will be finding out about it sooner rather than later.

There aren’t many big surprises here as Farrah’s answers are pretty much what we’re used to hearing from her, but it was a bit odd to have an interviewer come to Farrah’s defense, as Dr. Rachael Ross does on a couple of occasions. (I get the impression that Dr. Ross may buy into Farrah’s sales pitch that this was a “private” video that she was forced to release after a series of unfortunate circumstances and a betrayal by “boyfriend” James Deen.)

Anyways, here are both of the clips of Farrah Abraham on The Doctors followed by transcripts of the conversations:

Farrah Abraham on her toy line:

Dr. Rachael Ross: You’re in the headlines not just for some of the other things that you’ve done, but recently you’ve come out with a —

Farrah: My new sex toy line, yes, which is positive, healthy and fun for other couples who have sex lives or are expressing their sexuality, so I’m excited.

Dr. Rachael Ross: Expressing sexuality is of course important, now um, but before we kind of get into the sex toys thing, you became famous from Teen Mom. So, how old is your daughter right now?

Dr. Jim Sears: Does your daughter know you’re coming out with sex toys?

Dr. Rachael Ross: It is important that we keep in mind that this type of thing is for adults, and hopefully you are going to make all your kids go out of the room because we’re actually going to talk about your sex toy a little bit here. Now this is actually molded off of your body parts, is that correct?

Farrah: Yes, so I actually partnered with Topco Sales, and they have a patented cyberskin, is what you’re feeling right there. So those are the most popular, I guess, novelty sex toy items that men and women like to buy now.

Farrah Abraham on parenting Sophia and dealing with her daughter finding out about the videos:

Dr. Ian Smith: Splurging this whole kind of “sex industry,” let’s just call it that, and you’ve got a four-year-old child, right? So you have a sex toy line, which is pretty interesting for a 22-year-old, but also you’re known, at least on the internet, from what I could see — you Google your name and the first thing that comes up is your sex tape, so —

Farrah: First and foremost, if you are in a certain light, like you know a lot about medical and you become a doctor, or you want to do more things, and earn more money, be a better business person, then your pursue that because it’s natural for you. So I’m just taking advantage, you know, having my cake and eating it too.

Dr. Ian Smith: But I’m just curious — I understand that, but I guess my question to you is that you said you have a four-year-old child?

Dr. Ian Smith: And the sex [they show a photo of Farrah and Sophia together], there’s your daughter, she’s very beautiful.

Dr. Ian Smith: But I understand, you know, maybe the sex toy line from an entrepreneurial standpoint, I’m just trying to reconcile how the sex tapes with a child who’s going to grow and use the internet pretty soon —

Farrah: You know, I think that’s a valid point. I think as all parents know, when children can use the internet, and they will, then if she has questions my — well then I’m very open and honest to a certain point, and she’ll know the reasons why things happened. And for myself, I got to work, I do licensing deals, I create products, I do other shows. I’m very open and honest about it and my choices of why. So that’s something I’m actually proud of because others could look at this and make it a negative, act like it’s going to ruin their childs’ lives, and it’s not. 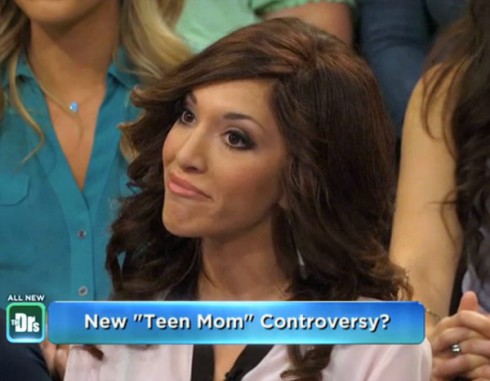 Farrah: I’m not talking about sex tapes, you know, that’s —

Dr. Ian Smith: And I always think, “what would this — what are the implications or ramifications for my kids?

Dr. Ian Smith: Like, you know, my kids are going to grow up and see their dad — what I’ve written, what I’ve done on TV — they’re going to see that, so —

Dr. Rachael Ross: But in her defense, she has to pay her bills too. You’re going to the doctor, you’re a doctor, you’re here, you’re making money — we all do that. But in her defense, I mean she had a celebrity sex tape that was released and so she’s capitalizing on it. We’ve seen that with Kim Kardashian, we’ve seen this over and over. And I’m not saying that it’s right, but at the same point, we have to understand that different people meet their financial needs different ways, and respect the fact that she has created a little sterile environment for her daughter to be in so that she can isolate her from that until that talk comes, because at some point you are going to have to talk to her.

Farrah: Of course. I mean I talk to people about sex all the time — contraception, those things. And I also understand that everything that I do, and I know that in my circumstances — yes, I’m not married, yes, I am single, yes, I will be sexually active — but, I also separate my dating life, I separate where I’m going. And it’s very hard, I think, some of those things, juggling all that does get very complicated.

Dr. Ian Smith: So when your daughter comes home, let’s say fifth grade, sixth grade, because fifth graders are on the internet now.

Dr. Ian Smith: And her friends are saying, “Wow! I just Googled your mother’s name and I see all these sex videos, these very graphic sex videos.” How do you explain that to your daughter? Like, what happened, why you did it, why you’re making it so available?

Farrah: Like I would explain to other people when I’m talking about sex conversations now. Yes, I was involved with somebody. Yes, it is on the internet. This is what it is, and this is how we’ve moved on from that. So, really, we’ve already moved on from it, and when it gets brought up, it’s only reinitiating what we learned from it: what we’re not going to do, how to live your life better.

Dr. Jim Sears: Yo, you can talk to your daughter all you want, and it’s gonna be, you know, I trust that you’re going to have a great conversation with her. It’s going to be all her friends in class —

Dr. Rachael Ross: There are so many things that kids get teased about on a daily basis.

Jim Sears: I’m worried about that.

Dr. Rachael Ross: So that’s going to be one of the things on top of that. But I commend you for moving forward with your life and turning, kind of, lemons into lemonade. But, you know, from an entrepreneurial standpoint, and from a woman’s standpoint, I understand where you’re coming from with this and I just commend you on moving forward with your life.

Dr. Rachael Ross: Instead of lingering in the back. [blogger chuckle]

Dr. Ian Smith: And I hope that for the people who are looking at home and in the audience, you know this whole thing about sex tapes, and this quote/unquote “celebrity sex tapes,” I don’t even understand what that means to be honest with you by the way, the idea that this has become a tradition and like such a fad, I just think that that is — and this is just my personal opinion — I just think that when you are a parent, or going to be a parent soon, that putting this stuff in the universe is a little TMI. And I just think that, you know, that’s just the way it is.