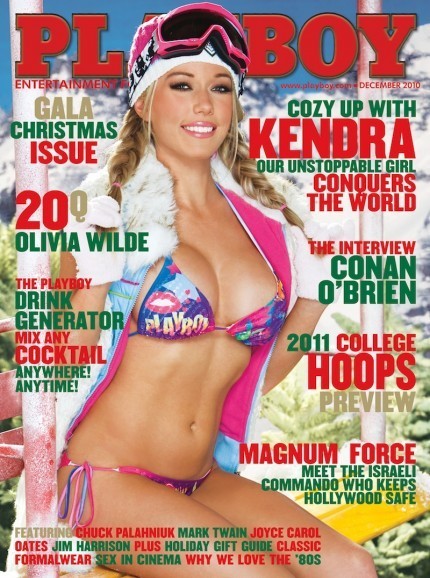 If you watched the season premiere of Kendra! we learned that after much soul searching with her husband, Kendra ultimately turned down a Playboy photo spread because she was “doing it for the wrong reasons.”

Now she’s on the 2010 December cover of Playboy! What gives?

Did she find the right reason?

Just to clarify, Kendra explained on her blog why she’s suddenly on the cover after all that hullaballoo:

Hey guys! So I wanted to clear something up really quick! A lot of you saw on my show that I was struggling to decide whether to pose for Playboy again or not. I AM on the December cover of Playboy but it wasn’t from a recent shoot. The photos are from a shoot I did 2 years ago when I was still living in the mansion. I’m flattered to be on the cover again and as you all know Playboy has a very special place in my heart! I just wanted you guys to know I didn’t recently pose.

Kendra became a mom about a year ago to Hank Baskett IV, and has since slimmed down to her old Playboy-ready shape, but decided not to do a Playboy shoot because she was just doing it to prove other people wrong. When she did the shoot two years ago, it was too make money from being nekkid (and probably, if she’s honest with herself, to prove to others that she’s hotter than most).

So I’m still a little confused about the wrong reasons, and the right reasons to pose for Playboy. It seems that if you really enjoy posing for Playboy, wanting to prove to other people how hot you are is just part of the package deal of reasons to do it.

Kendra is currently still living in L.A., away from her husband Hank Baskett, who is in Minnesota playing for the Vikings.