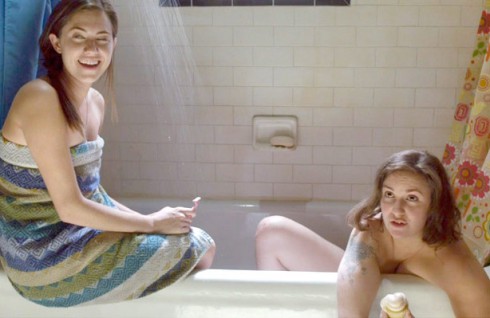 Lena Dunham is often naked on her HBO series Girls, and a lot of people have a lot of opinions about that. Recently, the issue of Lena’s on-screen skin came to a head when The Wrap reporter Tim Molloy asked Lena and her producer Judd Apatow about it during a Television Critics Association panel. Why is Lena naked a lot of the time? Why does it even matter?

Here’s the question that stirred the pot, posited by Mr. Molloy: “I don’t get the purpose of all the nudity on the show. By you particularly. I feel like I’m walking into a trap where you say no one complains about the nudity on Game of Thrones, but I get why they’re doing it. They’re doing it to be salacious. To titillate people. And your character is often naked at random times for no reason.”

Lena responded that she was naked on the show because people are naked sometimes. “Yeah. It’s because it’s a realistic expression of what it’s like to be alive, I think, and I totally get it. If you are not into me, that’s your problem,” she said. Judd Apatow then asked the reporter if he had a girlfriend, and when he responded in the positive, he told him that his girlfriend probably wouldn’t like the question he just asked.

What’s interesting about Mr. Molloy’s question is that he posits that the nudity on Game of Thrones, and possibly other shows, is solely to titillate. Sure, that’s part of it, but is that the only reason nudity is shown on television or in movies? Is the purpose of ancient Greek sculpture simply to titillate? Or is there something more complicated going on?

Lena’s body has become a matter of cultural concern since the show first aired because she isn’t stick thin, and dares to have more nude scenes most actresses who are stick thin. She isn’t afraid to use her body, sometimes for comedic effect, using her posture and camera angle to seem more awkward, and occasionally to accentuate her body’s beauty. Lena’s character Hannah is wracked with anxieties and a whole host of other “white girl problems, but she seems comfortable in her skin. Some have called Hannah’s lack of clothing a “revolutionary act.” In a society where it can seem shameful to even have a body at all if it’s not perfect, maybe it is a revolutionary act.

“Every girl is expected to have caucasian blue eyes, full Spanish lips, a classic button nose, hairless Asian skin with a California tan, a Jamaican dance hall ass, long Swedish legs, small Japanese feet, the abs of a lesbian gym owner, the hips of a nine-year-old boy, the arms of Michelle Obama and doll tits. This is why everyone is struggling.”