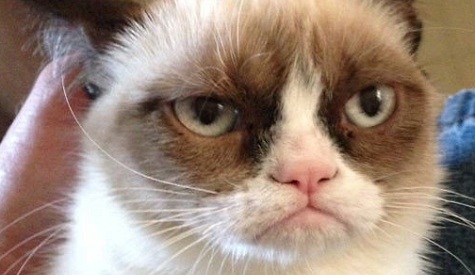 Bryan and Tabatha Bundesen, the siblings who own Tardar Sauce, say that she always has that grumpy look with the turned-down mouth and “over it” eyes because of feline dwarfism. The condition also makes her sigh a lot, and gives her stiff back legs, but otherwise she’s a healthy and happy kitty.

Bryan explained how the phenomenon of Grumpy Cat started to ABC News, “She was lying in my lap and she looked extremely grumpy so I decided to put it on Reddit. It went viral and I never expected it.”

Tardar Sauce and her family got to attend SXSW (a hip film and music festival held annually in Austin, Texas) as part of a press event for Friskies because she’s set to star in an upcoming commercial. She also got set up in a tent (complete with a warm and comfy bed) hosted by Mashable so fans can take pictures.

When news hit that the famous cat was attending the festival, blogger Mike Isaac of allthingsd.com made a plea to “Free Grumpy Cat” from all this exposure:

I’m not cool with it. If I were a grumpy cat, the absolute last place I’d want to be is stuck in the middle of a 24-hour party for days on end, where throngs of drunk partygoers waited for a chance to take a picture with me. God knows I have a hard enough time being around them as a human capable of rational thought. Who knows what it’s like for that poor cat.

Personally, since Grumpy Cat just looks grumpy and doesn’t necessarily feel grumpy, I’m fine with her puttin’ in some time with her fans. She’s doing humanity a valuable service by representing, through a feline facial expression, the grouchy side of all of us.