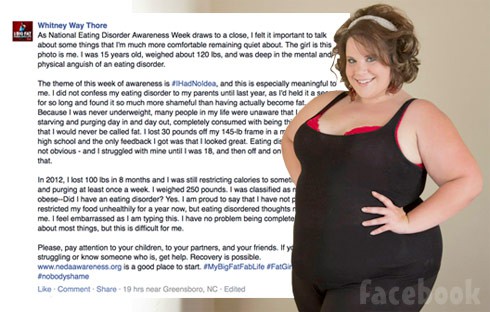 “Fat Girl Dancing” YouTube sensation and My Big Fat Fabulous Life reality star Whitney Way Thore is making headlines for publicly embracing her 380-pound body and promoting her “No Body Shame” movement. Whitney has been very open about how being diagnosed with polycystic ovary syndrome (PCOS) and the resulting insulin resistance contributed to her putting on weight rapidly during and after her freshman year in college, but Whitney’s weight and body image issues were a problem long before she left for college.

In honor of National Eating Disorder Awareness Week, Whitney took to Facebook to share her history with weight obsession that included purging & restricting. “The theme of this week of awareness is #IHadNoIdea, and this is especially meaningful to me,” Whitney writes. “I did not confess my eating disorder to my parents until last year, as I’d held it a secret for so long and found it so much more shameful than having actually become fat.”

The #IHadNoIdea hashtag could easily be accompanied by #TheyHadNoIdea because of the fact that eating disorders very often go completely unnoticed by friends and family members of those suffering from them. Whitney reveals this was certainly the case with her. “Because I was never underweight, many people in my life were unaware that I was both starving and purging day in and day out, completely consumed with being thin enough so that I would never be called fat,” she reveals.

Whitney says that even with DRAMATIC weight loss in a short amount of time, people still had blinders to what was really going on. “I lost 30 pounds off my 145-lb frame in a month once in high school and the only feedback I got was that I looked great,” she says. 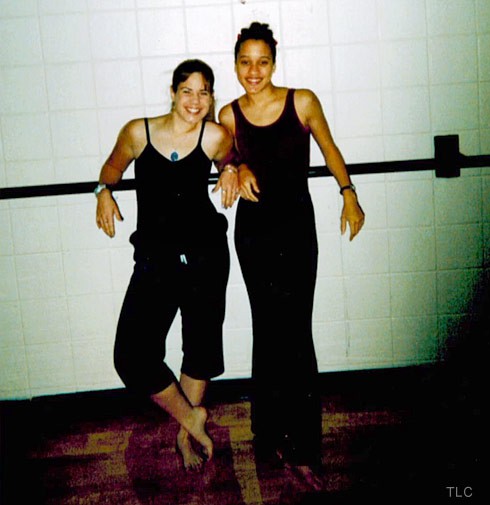 The 30-year-old reality star shared a cropped version of the photo above (Whitney is on the left) and wrote, “The girl is this photo is me. I was 15 years old, weighed about 120 lbs, and was deep in the mental and physical anguish of an eating disorder.” (You can see more before photos of Whitney here.)

Whitney stopped consistently purging after turning 18, but it continued off and on for years after that. “In 2012, I lost 100 lbs in 8 months and I was still restricting calories to sometimes 500/day and purging at least once a week. I weighed 250 pounds.” She pints out, “I was classified as morbidly obese–Did I have an eating disorder? Yes.”

Thankfully, Whitney has recently come to terms with her eating disorder and seems to have it in check. “I am proud to say that I have not purged or restricted my food unhealthily for a year now, but eating disordered thoughts never leave me.” Whitney revealed that her eating disorder is on a VERY short list of things she still finds it difficult to talk about publicly. “I feel embarrassed as I am typing this. I have no problem being completely open about most things, but this is difficult for me.”

“Please, pay attention to your children, to your partners, and your friends,” Whitney concludes. “If you’re struggling or know someone who is, get help. Recovery is possible. www.nedawareness.org is a good place to start. #MyBigFatFabLife #FatGirlDancing #nobodyshame”