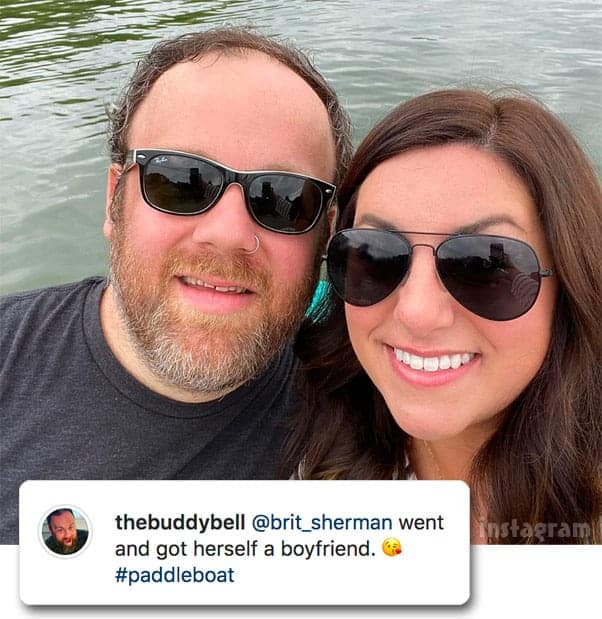 My Big Fat Fabulous Life star Whitney Thore is still dealing with her break up from fiance Chase Serverino after he revealed that he is back together with an old flame after getting her pregnant. Meanwhile, Whitney’s burly bestie Buddy Bell seems to be having a bit more luck in the romance department!

Buddy broke the news about his new relationship with a selfie posted on Instagram on Sunday. “@brit_sherman went and got herself a boyfriend,” Buddy captioned the image (above), adding a 😘 kissy emoji. Thanks to his tag, we know that Buddy’s new bae is Brittany Sherman, an x-ray tech and interior designer who lives in a suburb in south Charlotte.

Brittany also shared a couple selfie, as well as a photo of Buddy chillin’ outside:

Great weekend with one of my faves 🥰 @thebuddybell

In addition to the congratulatory messages in the comments, some of Buddy’s followers were quick to point out that he looks to have lost some weight and some facial hair — in addition to gaining a bit of nostril bling.

Buddy returned a few days later to share a couple side-by-side photos and reveal that he was celebrating three years of sobriety:

3 years sober my dudes! I thought that a life without drugs and alcohol wouldn’t be a life worth living, but I’ve learned otherwise. This recovery thing is the sh*t. I have the best friends in the world and I can finally hold my head up high. If you’re struggling, google “12 step groups near me.” There are people there who cannot wait to hear from you. Love! #odaat #recoveryispossible #alcoholic #12steps @explosmofficial

Whitney offered up her response in the comments. “🎉 happy sober birthday! Love you!” she wrote.

My Big Fat Fabulous Life fans are no doubt happy for Buddy and his new boo, but I’m guessing some might be slightly disappointed that the new relationship announcement wasn’t about him and Whitney. The chances of that happening seemed to increase after Whitney shared a video update on her life with TLC Me last month and revealed that she and Buddy have been quarantining together.

“After I had announced the situation on social media and everything, I just started getting really anxious,” Whitney reveals. “I actually had a really bad panic attack and went to the hospital here in Charlotte by myself,” she adds.

Whitney says that she called an ambulance because she was afraid to drive in her condition. “When I was discharged a few hours later, it was, like, two in the morning and I didn’t have a ride,” she says. Whitney first gave her brother a call, but he wasn’t able to pick her up. “So I called Buddy, and he drove from Greensboro to pick me up from the hospital.”

Whitney says that Buddy was only planning to stay for a few days, but at the time that she recorded the video, he had been with her for six weeks. “It’s been really nice to have him here,” Whitney says.

It’s unclear when or how Buddy and Brittany met. As mentioned above, she is an x-ray tech, so I imagine it is quite possible that they met during one of Whitney’s medical visits. That is purely speculation though!

A huge double congratulations to Buddy — on his new romance and his sobriety! It’s unclear at this point if there will be another season of My Big Fat Fabulous Life, but I’m sure that if there is we will see his romance with Brittany play out on screen.

Meanwhile, some online sleuths managed to uncover multiple baby registries for Chase and his new old girlfriend, which reveals a due date of September 25. It’s pretty easy to do the math and realize that if that due date is correct, the child was conceived some time around the first week of January. That was just a few months after Chase and Whitney’s Paris engagement on October 9, and right about the time of the Season premiere on January 7.

Congratulations to #MyBigFatFabulousLife's @WhitneyWayThore on her romantic Paris engagement to fiance Chase Severino! Get all the details, plus meet Chase in the extended preview trailer for #MyBigFatFabLife Season 7, premiering January 7 on @TLC! https://t.co/IbaptkwOBn