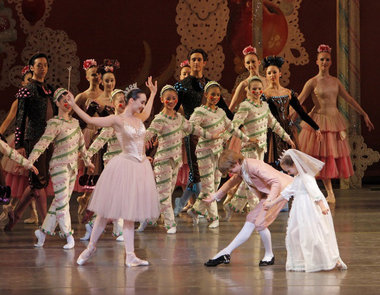 36-year-old Jenifer Ringer plays the Sugar Plum Fairy in the New York City Ballet production of The Nutcracker, and while she would be considered thin even in Hollywood, she has a bigger body than most ballerinas.

New York Times dancing critic Alastair Macaulay took note of that by saying she looked like she’d had “one sugar plum too many.” His remark raised a media firestorm, especially since Ringer has been publicly open about her struggles with anorexia and overeating in the past. She’s probably now a bigger ballerina because she’s allowed herself a more healthy relationship with food, but Macaulay doesn’t think that these types of personal issues should matter when you’re a ballerina. His response was “If you want to make your appearance irrelevant to criticism, do not choose ballet as a career.”

On The Today Show this morning Jenifer admitted that Macaulay’s weight comment made her feel bad about herself but she quickly moved on from it. “Where I am in my life right now, I was kind of to move forward from it.”

She’s touched by the outpouring of support she’s received from the media and the public.

This issue is especially in the forefront in the media with the release of Darren Aronofsky’s critically acclaimed ballet psycho-drama The Black Swan, starring Natalie Portman and Mila Kunis, who both had to drop down to extreme weights to accurately portray the ballet world.

Ringer acknowledged that the pressures to have a perfect body can help promote anorexia, but pointed out that ultimately anorexia undermines the true pressure on a ballerina: to be as physically strong as possible.

She responded to Macaulay’s opinion that a ballerina should expect her body to be criticized with the fact that she’s not overweight, but has “a more womanly body type than the stereotypical ballerina” and noted that the NYC Ballet featured physically fit dancers of all shapes and sizes and “they can all dance like crazy. They’re all gorgeous.”