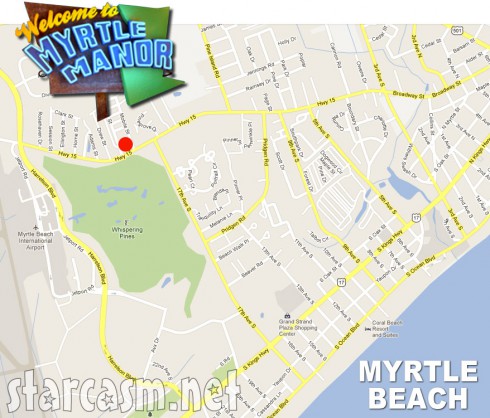 As you could probably tell from our positive review of the premiere, we’re fans of TLC’s new reality series Welcome To Myrtle Manor, which features a large (and still growing!) cast of eclectic characters all residing in the Myrtle Manor trailer park in Myrtle Beach, South Carolina. But, if you’re like us, you’ve found yourself wondering two things: Where is the Myrtle Manor trailer park in Myrtle Beach, and where does everybody on the show live in relation to each other in the park?

So, we took it upon ourselves to answer both questions! The first one is kind of a trick question, because until recently, Myrtle Manor was just called Patrick’s Mobile Home Park after the family that owns it. (You’ve seen owner Cecil Patrick featured on the show several times already.) Patrick’s Mobile Home Park is located at 2000 Highway 15 in Myrtle Beach — you can see where it is in relation to the rest of Myrtle Beach in the map above. (Notice it is near the Myrtle Beach International Airport.)

Actually, it appears that the park now goes by both names. How do I know that? From this video report on the fact that the Myrtle Manor sign (which hung underneath the Patrick’s Mobile Home Park sign) was stolen!

Now, as for the second question of where all the cast members live in the Myrtle Manor trailer park, I can offer a partial answer to that one. Judging by this satellite shot from Google Maps combined with watching the first two episodes very closely I was able to figure out where they installed the above-ground pool, and from there I could figure out where most of the cast members’ trailers are. Here’s a large aerial view of Myrtle Manor: 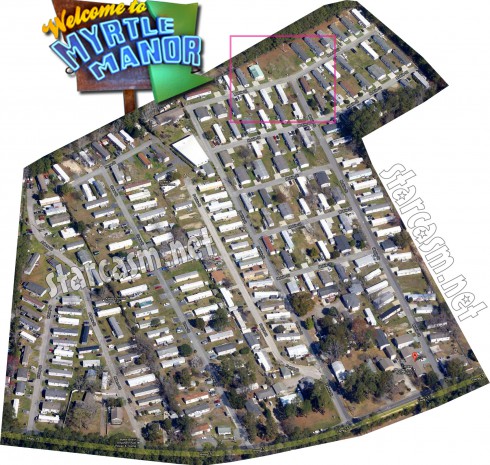 And here is the area in the little pink rectangle above zoomed in with the location of those cast members living close to the pool: 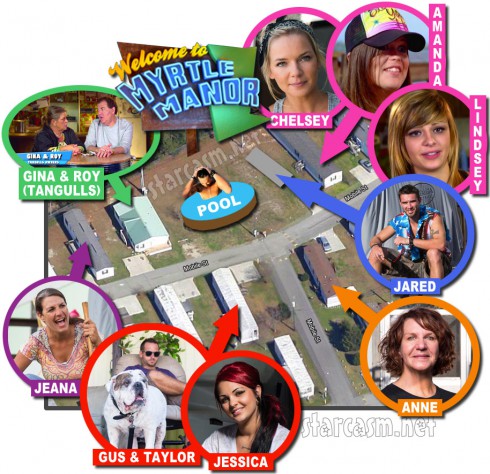 It seems pretty clear that there was a little rearranging done prior to filming, which makes complete sense. Tangulls looks to have gotten a paint job, Jared’s “Silver Bullet” trailer was added, and Anne’s trailer on the show has a different color roof so it looks like she may have been relocated prior to filming to the location in the map above.

I hope the map will help you better understand a lot of the drama on the show by illustrating where Chelsey, Lindsey, Amanda, Jared, Anne, Gus, Taylor, Jessica, and Jeana live as well as the location of the Tangulls hair salon owned by Gina and Roy.

If I find out where some of the other residents (including the ones we haven’t met yet, like Shellie, I will add an updated map. (I really want to know where Ms. Peggy and Bandit live!)

VIDEO The Game has too much bank, roaches drunkenly disagree