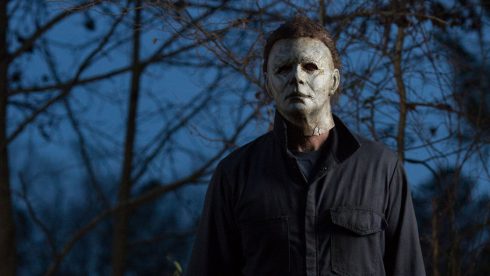 The 2018 version of Halloween has been a blockbuster hit. The film’s monster Michael Myers, also billed as “The Shape,” is super creepy, but who is it under the mask?

James Jude Courtney has done stunt work for most of his career. In the latest Halloween movie (which acts as a sequel to the original 1978 film, set 40 years later,) he steps into the role of Myers with expert precision.

He even learned from a real life hit man how to portray killing with more realism in the film. “There’s a stealth efficiency to the way an actual trained killer works,” Courtney told Vanity Fair> about what he learned from the hit man. “Movies tend to dilute that quality with dramatic pauses and dialogue, which a true predator would never waste time doing. That efficiency is what I took to the part of Michael Myers.”

Below is a photo of the new Michael Myers, James Jude Courtney, on the right and the original Michael Myers, Nick Castle. Nick made a cameo appearance in the new film.

Courtney says taking on the Michael Myers mask lets you into an exclusive club. “No one else will get to experience that,” he said about the role he shares with six other people. “Part of the honor of this experience is being able to join a club with these distinguished gentlemen who happen to kill people for a living.”

Is there going to be a Downton Abbey movie?