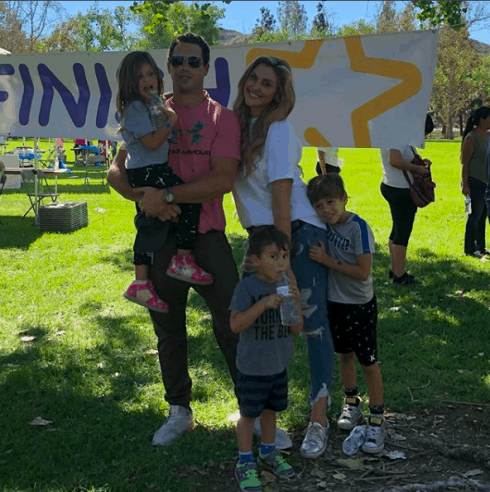 RHOC’s Gina Kirschenheiter and husband Matt are very happy and recently attended a charity event as a family, but they’re still moving forward with their divorce, which should be finalized by November 2. “It’s complicated getting divorced, and there’s a lot of paperwork,” Gina revealed to The Daily Dish. “There’s all this back-and-forth, so we’re just getting a little bit confused in the process, so we just said, ‘Let’s just sit down and take an entire day to just bang this out,’ so that’s what we’re doing.”

Besides no longer being in a legally binding situation, Gina says they are a happy family. “We’re still doing the same thing we’ve been doing. Nothing’s really changed for us this whole time. It’s OK. It’s good. We just did this charity thing together last weekend,” Gina said. “I mean, we’re still a family, so that’s never gonna change. We’re just not gonna share a bank account anymore, you know?”

Love this tank! Such a simple message but so powerful!!!! Also the fabric is heaven!! Picked this up from a new graphic-tee online boutique @theupliftco the owners are locals. A beautiful young couple with two littles. One of whom goes to preschool with Luca. ? ❤️ take advantage of the killer sale they r running this weekend!! Check out my story for swipe up info ?? #supportlocalbusinesses #momssupportingmoms

Gina went on to explain that maintaining a family relationship after marriage is work, just like a marriage is. She says they put their three children, Nicholas, Sienna, and Luca, before any of their personal issues with each other and they constantly go out of their way to be kind to each other. “I mean, we’re still a family, so that’s never gonna change. We’re just not gonna share a bank account anymore, you know?”

Channing Tatum was in tears during daughter’s birth