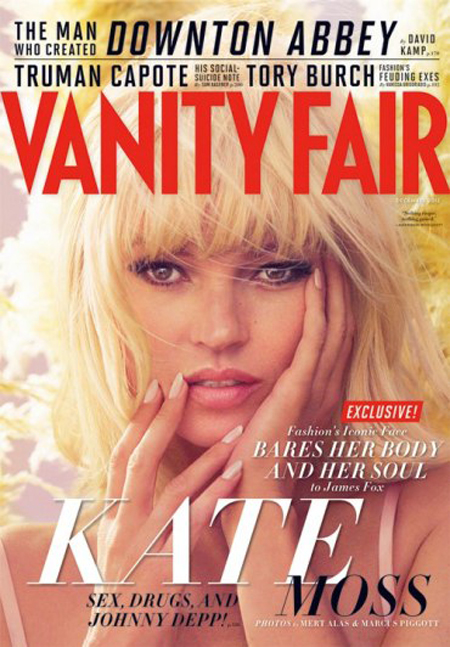 Kate Moss talked to Vanity Fair about symbolizing “heroin chic,” rumors of anorexia, breaking down over a modeling gig at 17, and how painful it was to lose her relationship with Johnny Depp, who she dated from 1994-98.

Kate Moss’s thin frame, pale skin, and somewhat hollow-eyed waif look became a symbol for a look called “heroin chic” after a 1993 Calvin Klein campaign directed by Vincent Gallo featured the young model while taking advantage of the “look.” Even though she was an icon for this fashion moment, Kate says she’s never actually tried heroin:

“I had never even taken heroin–it was nothing to do with me at all. I think Corrine–she wasn’t on heroin but always loved that Lou Reed song, that whole glamorizing the squat, white-and-black and sparse and thin, and girls with dark eyes. She loved that look. I was thin, but that’s because I was doing shows, working really hard.”

Anorexia plagues the fashion industry, and it’s a complicated thing because some women are naturally pretty thin. It’s pretty standard though, for food to be shunned among models in order to achieve and/or maintain their look. Kate herself has made the “thinspiration” phrase “nothing tastes as good as skinny feels” her motto, but she claims to have never actually been anorexic.

“At that time, I was staying at a B and B in Milan, and you’d get home from work and there was no food. You’d get to work in the morning, there was no food. Nobody took you out for lunch when I started. Carla Bruni took me out for lunch once. She was really nice. Otherwise, you don’t get fed. But I was never anorexic. They knew it wasn’t true–otherwise I wouldn’t be able to work.”

Kate suffered from severe anxiety after a modeling shoot when she was a teenager, and points out that the fashion industry doesn’t really do much to look after the models’ mental health:

“I had a nervous breakdown when I was 17 or 18, when I had to go and work with Marky Mark and Herb Ritts. It didn’t feel like me at all. I felt really bad about straddling this buff guy. I didn’t like it. I couldn’t get out of bed for two weeks. I thought I was going to die. I went to the doctor, and he said, ‘I’ll give you some Valium,’ and Francesca Sorrenti, thank God, said, ‘You’re not taking that.’ It was just anxiety. Nobody takes care of you mentally. It was just really weird–a stretch limo coming to pick you up from work. I didn’t like it. But it was work, and I had to do it.”

Kate married The Kills guitarist last year after dating him since 2007, but she still feels Johnny Depp’s the only one who was able to “take care of her.” When they broke up in 1998, she said she cried for years.

“There’s nobody that’s ever really been able to take care of me. Johnny did for a bit. I believed what he said. Like if I said, ‘What do I do?,’ he’d tell me. And that’s what I missed when I left. I really lost that gauge of somebody I could trust. Nightmare. Years and years of crying. Oh, the tears!”