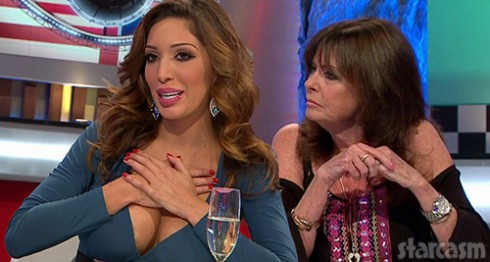 Farrah Abraham may have a unique souvenir to take home from London: an assault charge.

While appearing on Celebrity Big Brother UK’s spinoff panel discussion, Bit On The Side, earlier this week, Farrah got into a heated argument with Aisleyne Horgan Wallace. After Farrah called Aisleyne a “hag,” the British media personality threw her champagne flute at Farrah. Although the live show cut to a CBB logo, witnesses said Farrah retaliated by throwing chairs and glass back at Aisleyne — injuring actress Vicki Michelle in the process. 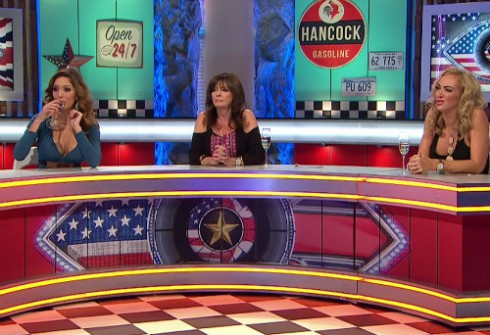 After she was tended to at the hospital, Vicki said she suffered whiplash and a concussion from the glass thrown by Farrah.

“I’m in complete and utter shock. If I had been looking the other way I could have got it full in the face, she could have blinded me. It was awful,” Vicki told The Mirror. “She whacked the glass hard like a discus. It was the base of the glass and it shattered in my hair.”

Today, Vicki’s agent told ITV News she plans to press charges against Farrah for the assault. The rep explained in a statement, “Vicki has been in show business for 40 years and has been left in deep shock and with concussion after the attack by Ms. Abraham.”

In a subsequent statement to The Daily Mail, a spokesperson for the Hertfordshire stressed the investigation is ongoing and no arrests have been made. Farrah’s agent said they have been cooperating with authorities since the beginning. For her part, Farrah seems to say she was the victim.

I will NOT be attending the @bbuk finale tonight!? I don’t wish to put myself in a potentially hostile situation #Cbb pic.twitter.com/YDTcF5e48H

New BFF Jenna Jameson is backing Farrah up on Twitter. “We left by choice, since others were so insane,” Jenna said, after someone claimed she and Farrah were escorted out of the building by police following the fight. “I was witness to the melee on #BBBOTS that whacked out has been through champagne into my eyes, aiming for Farrah, starting the fight… Janice Dickinson went on a rampage slinging chairs hitting Farrah in the head and back!”

Jenna also retweeted and agreed with someone who said she and Farrah were set up by Celebrity Big Brother in the “old lady gang” attack. She added Farrah isn’t saying much for now because she is “healing and dealing with doctors.”

Farrah Abraham addresses giving her puppy Kandi to a neighbor