The television industry has gone through some incredibly dramatic changes over the past decade with network domination being rapidly eroded thanks to a tidal wave of original cable and streaming programming. Part of the reason for the viewer migration is that cable and streaming companies are able to take bigger chances with niche markets, and are also able to keep critically acclaimed shows alive with a lower viewership than networks. As a result, dramatic Emmy Awards and millions of viewers are going to shows like Breaking Bad, Game of Thrones, The Affair, Mad Men, and Orange Is the New Black.

But another huge reason for the success of cable programming is the explosion of reality programming. Filming most reality shows is exponentially less expensive than scripted series, so cable networks are able to create numerous new shows in hopes of finding something that resonates with audiences, all without much of a financial risk.

Of course, part of the reason that reality television shows are so inexpensive is because the industry is not unionized and labor is cheap. Production crews (and the show’s stars) are often paid very little, yet asked to work long hours in conditions that are often difficult and/or downright dangerous.

These working conditions have started a movement to unionize the reality TV industry, which of course would make them more expensive, so it would be more difficult for cable networks with smaller budgets to take chances.

Given all of this, it only makes sense that the natural evolution of reality TV would exclude the production crew altogether! And that’s exactly what a new series by Guardian does, thanks to some infamous new technology most everyone is familiar with, although probably not firsthand. 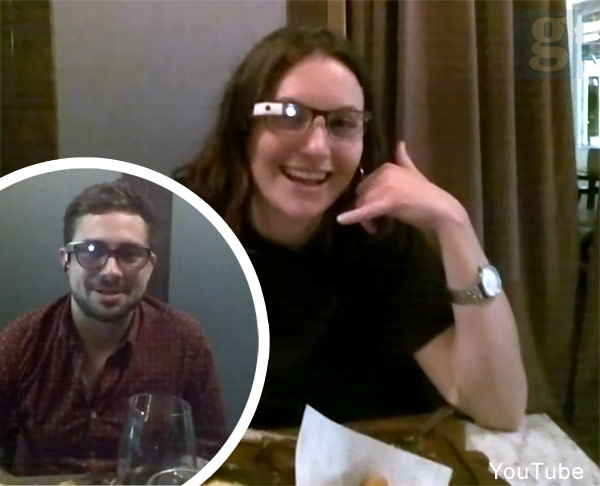 The YouTube series is titled Watch Me Date and it is based on The Guardian‘s Blind Date print column, which, as you probably guessed, documents two people meeting on a date for the first time. On Watch Me Date, both participants wear Google Glass eyewear and record their entire interaction together from both viewpoints. Although the dates may take up to several hours, the footage is later edited (which is pretty much the entire production crew for the series) down to five-minute clips that includes some studio footage of the daters talking about their expectations before the date and their reflections after.

“It’s literally the video incarnation of a very popular column in the Guardian Print section,” executive producer Merrope Mills tells StreamDaily.TV. “At the time I thought it would make a brilliant video series but it was too complicated to shoot: as soon as you stick a camera in someone’s face, they act all different.”

But technology continued to evolve and eventually the awkwardness of the camera and equipment was no longer a problem. “Then Google Glass came along and we thought, that’s the cheap, unobtrusive way to do it.”

Here are some clips, starting with the trailer and followed by four individual episodes:

I can’t imagine this concept isn’t something that a network like MTV wouldn’t take a chance on, especially given that the cost per episode would be infinitesimal! Heck, a company like Viacom (which owns MTV and numerous other networks) could create multiple Watch Me Date incarnations geared specifically for their various networks, like BET, CMT, and even Nickelodeon. (A junior high Watch Me Date? Why not?)

And I don’t even want to begin to speculate what the integration of Google Glass (or similar wearable recording technology) will do the to landscape of reality TV! Can you imagine how much easier (i.e. cheaper) it would be to make a show like Survivor if all you did was make everyone wear Google Glasses and let them go?

And why limit this concept to just reality TV? If you take it to the next step, then why couldn’t you create faux documentary style scripted programming like The Office, Modern Family and Parks and Recreation filmed entirely via Google Glasses worn by the cast? Just work the eyewear into the concept of the show somehow and BOOM!