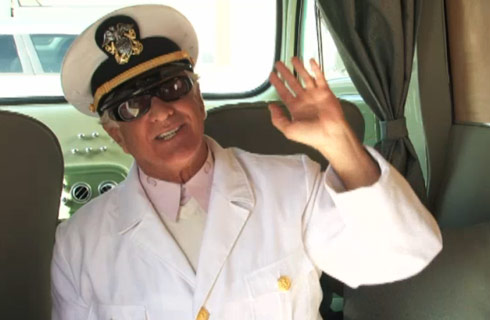 The only thing on Storage Wars more exciting than watching the bidders pilfer through their purchased storage unit looking for treasure is seeing what kind of contraption Barry Weiss is going to pull up in! “The Collector” Barry (who is the “Jewish godfather” of custom bike builder Jesse James btw) has quite the extensive car collection, including his famous custom “Cowboy Cadillac,” but even more impressive is his network of custom car-building pals who all appear to be completely cool with loaning Barry the keys to everything from a miniature red pickup (an International COE to be exact) to a bright yellow chicken car!

The latest Barry bud is cartist Randy Grubb, who let Weiss use his awe-inspiring art deco Winnebago boatmobile (otherwise known as the Decoliner) to pitch some woo at fellow bidder, and Jarrod Schulz better half, Brandi Passante!

I love how tentative Brandi is, asking Barry as she enters the shiny Winnebarrygo, “This isn’t like one of those weird swingers parties is it?” Then, as she steps inside, she exclaims, “Oh, it smells like gas in here.”

Barry, always quick on his feet with the Weisscracks, responds by calmly stating, “No, not really gas. I didn’t fart.” Almost magically (which seems to happen all the time around Barry) he just so happens to have some burritos (did someone say gas?) and offers one to Brandi. 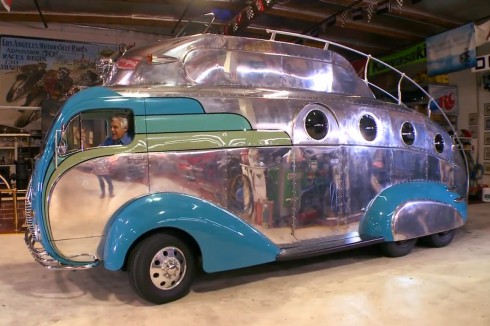 Barry reveals in the clip that the “Decoliner” was built by his friend Randy Grubb, so I did a little research and uncovered some more info on Randy and the Decoliner. From RandyGrubb.com:

“Randy was born in Glendale, CA, and inherited the confidence to pursue his Hot Rod obsession at an early age. His father taught him to weld at age 10, and he began his first full-scale project when he was 12 years old. Randy mated a full-race ’48 flathead Merc too a ’39 three-speed trans and torque-tube driveline and capped it with a Channeled Ford Roadster body. By the time he was 14 he had it cobbled together. That flathead terrorized the neighborhood until Randy’s father made him tear the car down and spend the next two years re-engineering his project and honoring his skills in fabrication and finish work. When Randy turned 16 his car was ready and roadworthy.

“Randy went to college to study dentistry, but while registering for classes,, he needed to fulfill an arts requirement and discovered a course in glass blowing. His natural affinity for the medium was obvious and a new life-pa???? was launched. He moved to Grants Pass, OR with his fiancee, Jeannette, and spent the next 20 years enjoying a successful career as a lamp-work paperweight artist. Glass was the focus of Randy’s time, but his love of Hot Rods never waned. ‘There was always a car project in the garage to satisfy my need to build.’ 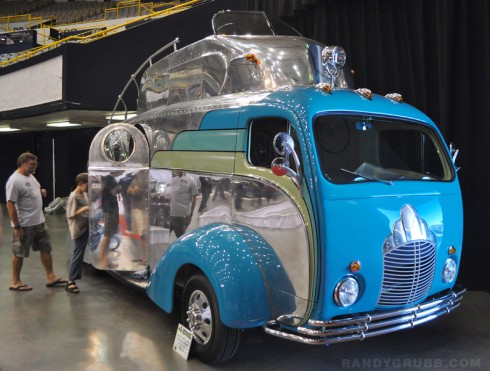 “Randy had always wanted to build an automobile from scratch of his own design. In the late ’90′s he began taking metal-shaping classes taught by Ron Covell. ‘Learning the skills of coach building would allow me the freedom to create anything, rather than cutting up an old car.’ About this time, Randy met Michael Leeds, another world class glass artist who was working on a giant, oversized, cartoon-like ’32 roadster named ‘Big Bertha’. Randy was intrigued and convinced Michael to finish the project instead and helped him discover metal shaping. The freedom Randy enjoyed during the ‘Big Bertha’ project whet his appetite for his own super-scale project. The engine he chose came from an M47 Patton Tank. When Michael saw the 1800 cubic inch V-12, he collaborated with Randy to create ‘The Blastolene Special’ concept and crystalized that vision in a drawing. Working 10 to 12 hour days alone in his small garage in Grants Pass, Randy was able to finish the Blastolene Special in 12 months. The project debute at the Grand National Roadster Show where it won the Chip Foose Excellence in Design Award. Talk show host Jay Leno noticed the car and purchased it for his collection, renaming it the ‘Tank Car‘.

“The Blastolene Brotherhood is an informal group of autonomous artists who encourage each other as they travel their respective paths. The Blastolene network is growing, as is the complexity of the sculptures. Randy feels privileged to have the support and encouragement from family and from his fellow Blastolene Brothers.

“Hope you enjoy the work.”

And here are a few videos beginning with an interview with Randy Grubb inside the Decoliner at the Specialty Equipment Market Association (SEMA) show in 2011 in which Randy explains the Decoliner was built from a Model 3000 White trash truck cab and a 1973 GMC motor home chassis:

And here is Randy and the Decoliner on the Jay Leno’s Garage web series:

And we’ll finish things off with a lengthy, 15-minute clip that not only talks at length about the Decoliner, but about Randy and Blastolene as well:

You can see lots of photos of the Decoliner in the process of being made over at RandyGrubb.com! 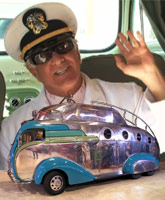