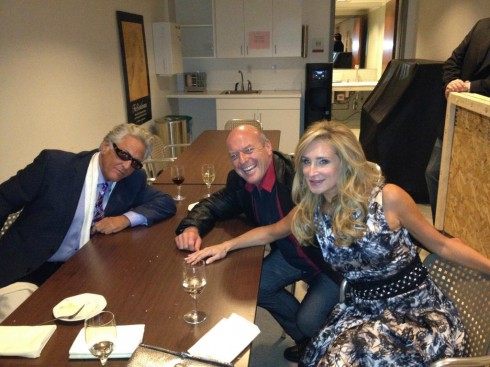 (I was debating on opening this post with “Sonja Morgan, Barry Weiss and Dean Norris walk into a green room… I think Barry would have preferred that.)

Sonja shared the photo earlier today along with the tweet, “Green room of The Morgan Library @NCCmedia event w/ #DeanNorris & @ItsBarryWeiss!” Actually, some of those glasses could have water in them, but I like to think they are full of some Ramona Singer Pinot Grigio!

These three need to star in a new series together in which Sonja Morgan plays a good gal gone bad who has turned to cooking meth in toaster ovens with labs set up in various storage units all over New York City. Dean and Barry (and a new vehicle every week) try to track Sonja “The Cooker Looker” Morgan down, but always seem just one step behind…

In case you were wondering about the amazing entity that brought these awesome celebripeeps together, here is the NCC Media “About Me” from their web site:

NCC Media is an advertising sales, marketing, and technology company that harnesses the enormous reach and consumer power of cable television programming, new interactive technologies, and online products in every US market. We work on behalf of virtually all of America’s leading regional and national advertisers. NCC is headquartered in The Chrysler Building in New York City with over 450 employees across 17 offices nationwide.

Now you can’t say you didn’t learn something.

PHOTO – Why does RHNY’s Sonja Morgan keep showing her (real and metaphorical) butt this season?