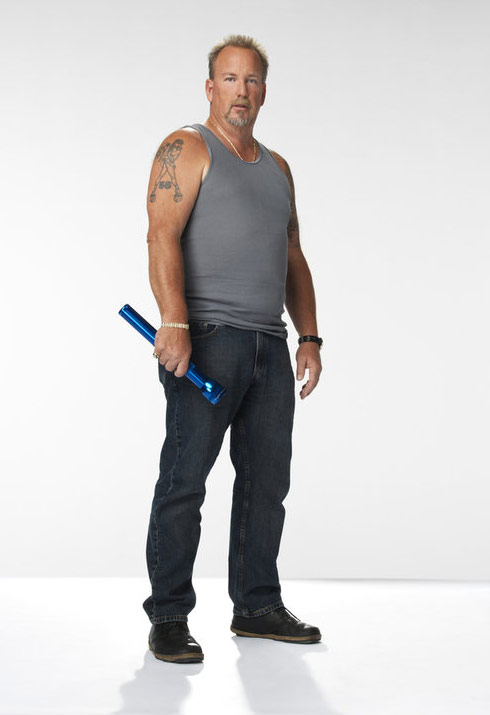 I’m sure anyone who has watched an episode of Storage Wars on A&E has wondered about some of the strange things that the stars have discovered in their many years bidding on abandoned storage units. The topic came up during a bonus episode aired by the network at the end of Season One titled “Unlocked: Buy Low” that featured all the cast members sitting around a poker table sharing stories at the abandoned Sahara Casino in Las Vegas, Nevada.

There was a fair amount of talk about porn0graphy, which the cast members said they find in about eight out of every ten lockers, as well as how they got started in the business and so on. Auctioneer Laura Dotson told a story about how one woman bought a unit with a 2′ x 2′ x 4′ box in it wrapped in plastic and when she opened it up there was a dead man inside. Never one to be outdone, Darrell Sheets revealed he was no stranger to dead bodies either!

“I actually found a body years ago in like 1988 down in Sand Diego, California,” he says. “You know, I don’t really want to talk about it a whole lot, but it wasn’t a pleasant situation. But in this business it does happen. I’ve found ashes, coffins…”

And in the current issue of Reality Weekly they quote Darrell Sheets saying, “It was a very horrific story, and it was an occult group and all that kind of stuff.” According to the magazine Darrel found a plastic-wrapped human corpse and that police later told him a man had murdered his wife and left her in the storage unit! “The San Diego police confiscated everything in the locker,” Darrell said.

Reality Weekly contacted the San Diego Police Department and was told by a representative that the story would be difficult to prove or disprove without more information like the exact date and location of the finding.

The episode is apparently sort of rare (It is not available on Netflix with the rest of Storage Wars Season One, and there are no upcoming showings listed in my DirecTV database) and the only clip I could find is this very rough version on Youtube. Darrell’s dead body story begins right around the 7:30 mark, Laura Dotson’s is just before that.