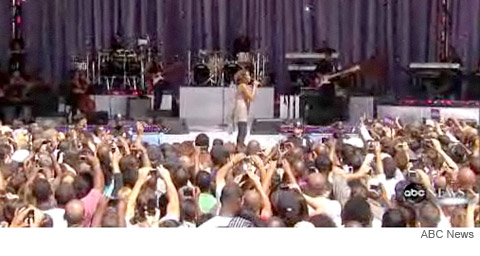 Whitney Houston continues her comeback bid, this time performing live in Central Park’s Rumsey Playfield on Tuesday. The performance was recorded and four of the songs were shown on Good Morning America this morning. Her voice seemed a little tired, and she acknowledged as much during the show, saying “I’m so sorry. I did ‘Oprah.’ I’ve been talking for so long. … I talked so much, my voice…” But that didn’t stop thousands of fans that traveled from all over the world from enjoying a moment they’ve been waiting for for a loooooong time.

I Look To You

My Love Is Your Love

Is Whitney Houston is addicted to crack again?