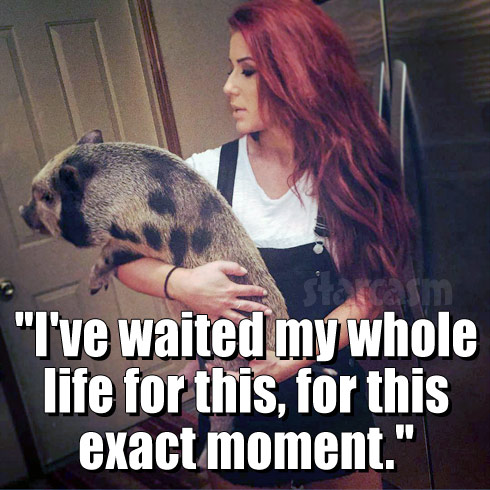 It’s a whole new week, which means a whole new batch of Teen Mom 2 preview clips! This week’s videos don’t feature any pregnancy announcements, divorce papers being served, or even a single arrest; instead, most of the moms deal with the fallout from last week’s super-dramatic events. But we do get to meet a brand new cast member! And he’s kind of a pig deal! 😉

Here are all the clips, along with brief summaries:

“It’s a pig day!” says Chelsea, as she and Cole head to the airport to pick up their newest family member: Pete the pig! “I’ve waited my whole life for this, for this exact moment,” says Chelsea.

“This moment of getting a pig,” adds a smiling Cole.

Later Chelsea laughs and says, “We have a child now. Don’t make me be a single mom again.”

Kail’s ex Jo is moving closer to she and Isaac–something Kail was initially wary of, but has since warmed to. She and Javi (who helped Jo move!) discuss the change in a refreshingly civil conversation. “I think it’s going to be good to have him close,” Kail says at the end; “I just don’t want it to get to be too much.”

“So you are owning up to–that you haven’t been able to be the best, like, person for your kids?” Miranda asks. “Are you owning up to that?”

Corey then tries to pin Leah down on whether or not she has an issue with drug abuse: “We understand what you deal with. We’re saying there’s something that you take to deal with that problem.”

“No, where the drugs come–” Leah says, before Corey cuts her off.

“Listen,” Corey says,” Can you look at Miranda and me in the eyes and tell us there’s no drug problem?”

“There is no drug problem,” Leah says flatly.

Corey is not convinced. “I think I know that there’s a drug problem, and I think that you’re afraid to tell me.”

Jenelle tries to convince a reluctant Nathan to give their relationship another chance. You know things aren’t going to go well when the volume of Jenelle’s voice rises. Eventually, her tears begin to flow, and she declares: “I only want you, Nathan! I only want you. Why do you not understand?”