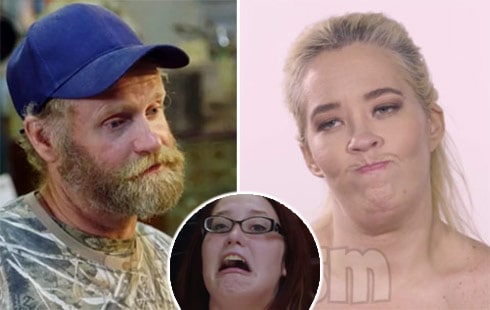 They may be Honey Boo Boo’s mom and dad, but June Shannon and Mike Thompson are being far from sweet to each other in the press!

“It’s time the world sees him for what he is. Pumpkin’s eye buckle was caused by him … because he got mad. So many emotional and physical scars with the kids.”

June says there was an incident involving Sugar Bear that transpired during the taping of the From Not To Hot reunion special that steeled her resolve to not put her children through something like that ever again.

In a preview for that upcoming special from WEtv, Thompson is seen slamming a door and Pumpkin is shown on the ground wailing:

Radar reached out to Sugar Bear and he denied any abuse. “No, I never abused them kids. I loved them kids,” he said.

June added that even though Alana was Thompson’s flower girl for his recent wedding that was featured on the show, the 11-year-old hasn’t had any kind of relationship with her dad “in a long time.”