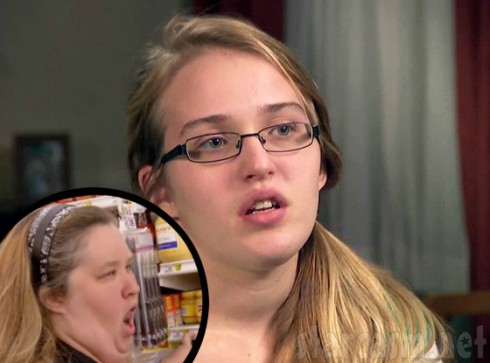 In a new interview with E! News, Anna explained she and her sisters all have trust funds with their earnings from the TLC show. Up until recently, she had $30,000 in her account. When she recently called to check on it, however, she learned only $17.90 remains.

“I have a feeling Mama used that money to buy a car or buy him what he wanted,” Anna said this week.

June said her daughter’s claim is “not true” and that all of Anna’s money is still in the fund.

“All her money is there, beside the money I have given her to live on—$400 every month and pay her $475 each month for cell phone bills for the last two years,” June said. “That’s the only money I have taken out of there.”

June also said she “never brought a car for him,” even though online records show she spent $25,000 on two Nissans in October — and one was delivered to the address registered to Mark.

Although Anna said June’s “always loved” Mark, she doesn’t know whether her mom feels the same way for her: “She ain’t tell me she love me in a long time.”

As we previously reported, Anna said June “didn’t believe” Mark molested her when she was 8 years old. Her grandmother was the one who actually defended Anna and helped her file a report; she later moved in with her grandma and didn’t return to June’s home until right Here Comes Honey Boo Boo filming began.

TMZ reported this week that Anna and her sisters will get paid for filming new episodes of Here Comes Honey Boo Boo, even though TLC will not air the season. June will not receive her full salary as the executives “squarely put the blame on her for the show’s cancellation.”