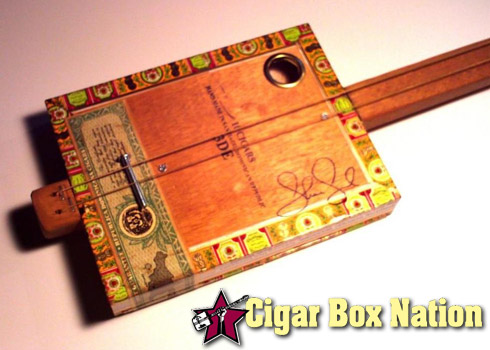 The late great songwriter Harlan Howard once said that country music is just three chords and the truth. Guitar maker and picker Shane Speal makes the argument that the blues is just two strings and a cigar box!

Check out this amazing video of Speal demonstrating one of his 2-string “Chugger” cigar box guitars:

Want one of your own? They’re only $75 while supplies last! From the Cigar Box Nation store:

A simple 2-string cigar box guitar designed for back porch playing, deep blues journeys and 4th of July parties. Shane Speal has built each one of these from scrap wood from his home recording studio. See video demo to hear it in its full glory.

Just $75 each. Signed and numbered by Shane Speal

US RESIDENTS: ORDER BY WEDNESDAY MORNING, JUNE 30 AND HAVE IT SHIPPED IN TIME FOR 4TH OF JULY WEEKEND.

Box is a small Macanudo cigar box. The fretless neck is pine with an approx. 24″ scale. Strung with A and D strings and able to play an array of different tunings (see video for examples). To be played with a slide (not included).

Fourteen “Chuggers” are currently available. Get yours now.

A detail image of the simplest guitar headstock you will ever see: 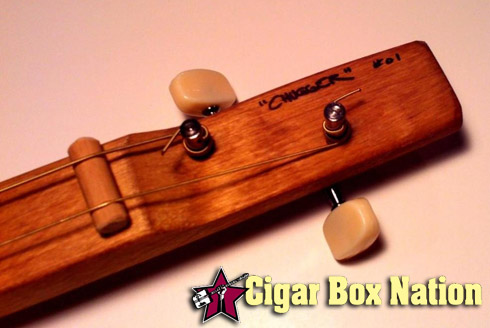 I’ve heard Lightnin’ Hopkins talk about learning to play guitar as a kid on a homemade cigar box guitar and I never understood how that was possible. Now I understand! (Which isn’t to say Lightnin’ played a two-string guitar initially or that his homemade guitar was anywhere as nice as one of Speal’s.)

Shane makes all kinds of cigar box guitars – you can check them out on his web site CigarBoxNation.com!