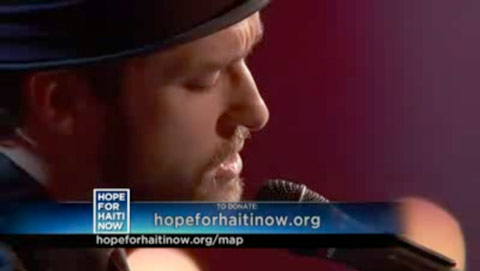 Watch Justin Timberlake’s performance of Leonard Cohen’s “Hallelujah” at the Hope for Haiti Now Telethon January 22. Justin pulls a very smooth, yet highly emotional rendition of “Hallelujah,” with an obvious influence by the Jeff Buckley cover.

Check out the gorgeous vocal stylings

Browse through the other wonderful musical performances from the Haiti Telethon HERE.

Your faith was strong but you needed proof
You saw her bathing on the roof
Her beauty and the moonlight overthrew you
She tied you
To a kitchen chair
She broke your throne, and she cut your hair
And from your lips she drew the Hallelujah

Baby I have been here before
I know this room, I’ve walked this floor
I used to live alone before I knew you.
I’ve seen your flag on the marble arch
Love is not a victory march
It’s a cold and it’s a broken Hallelujah

There was a time you let me know
What’s really going on below
But now you never show it to me, do you?
And remember when I moved in you
The holy dove was moving too
And every breath we drew was Hallelujah

You say I took the name in vain
I don’t even know the name
But if I did, well really, what’s it to you?
There’s a blaze of light
In every word
It doesn’t matter which you heard
The holy or the broken Hallelujah

I did my best, it wasn’t much
I couldn’t feel, so I tried to touch
I’ve told the truth, I didn’t come to fool you
And even though
It all went wrong
I’ll stand before the Lord of Song
With nothing on my tongue but Hallelujah

No, Janet Jackson’s family is still not happy with Justin Timberlake