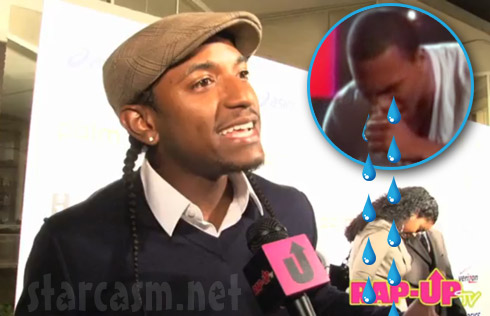 There’s been a great deal of speculation that Chris Brown’s emotional breakdown during his Michael Jackson tribute performance at the BET Awards was a big publicity stunt meant to get the troubled young singer back into the good graces of fans. That speculation is supported by a statement made by Interscope Records singer Lloyd Polite, Jr. in a post-awards-show video interview he gave to Rap-Up.com in which he claims he told Brown, “You gotta cry.”

Here is what Lloyd had to say in the interview in its entirety, with the crying comment in bold:

Chris is back! He’s back man, with a vengeance. He’s got a point to prove. All the people who wrote him out, I think that they’re gonna find a place in their hearts for him again, you know? And I told him, ‘Man, you gotta go up there, you gotta cry, you gotta really show your heart to the world and they’ll understand.’ I think time heals all wounds and I think that the spirit of Michael Jackson definitely carries over through the new generation. I’m really happy that he’s back. He did his thing. Mad shout to all Chris Breezy’s fans. That’s what it is.

**UPDATE** Lloyd has responded to the media’s reaction (starcasm.net included) to his statements about Chris Brown in the interview on his blog:

“I never told him to go on stage and cry. We spoke recently, and I told him as a friend that people hadn’t really seen him be vulnerable about his situation last year [with Rihanna]. I thought he was holding back and needed to let that emotion out. Him crying at the BET Awards was real, I could feel it.”

“Last week Essence.com asked me what artist most embodied MJ. I told them it was Chris. I never saw MJ perform live, but he [Chris Brown] is the closest thing I’ve witnessed. Chris is back, and I’m just as excited as his fans are. It’s just frustrating that people want to make everything negative.”

Aside from a small boost when his song “Forever” was used in the viral YouTube wedding entrance dance clip, Brown’s record sales have plummeted since he savagely beat then-girlfriend Rihanna in February of 2009. Assuming his public persona was bullet-proof, Chris Brown was photographed flexing his muscles and having a great time jet skiing in Miami soon after the arrest and only began his sympathy tour of half-hearted apologies after it was obvious domestic violence was getting him the street cred he thought it would, but by then it was too late. Oh, and his release Graffiti was just plain bad – that didn’t help either.

For a more detailed account of the rise and fall of Chris Brown, see our “Where Are They Now? Chris Brown” post!