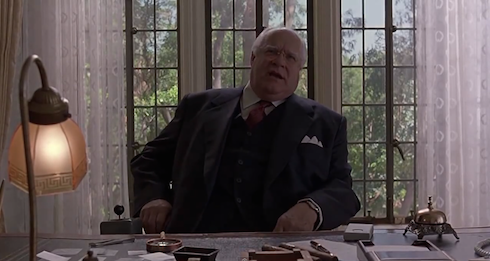 Police in Scottsdale AZ have put out an APB for a man who recently broke stride in the middle of a late-night walk with his dog to stop and relieve himself. That wouldn’t be a problem, except that the Scottsdale man in question decided that it would be a good idea to urinate not in the bushes, or behind a parking garage, or in the shadows between street lights–like the rest of us good citizens–but through the front door mail slot of an upscale furniture store.

However, the midnight micturator wasn’t counting on the fact that the store’s surveillance camera is mounted on the rear wall of the store. In other words, directly in front of the front door. So that the Scottsdale Pee Criminal’s act has been captured on camera for the whole world to see:

According to the Scottsdale PD, the man’s urine nicked a few pieces of mail and managed to soak a rug. Because the surveillance camera doesn’t pick up audio, reports that the man muttered “Ever thus to deadbeats, Lebowski” while micturating upon the rug could not be confirmed.

In another amusing side note, a spokesperson for the U.S. Postal Service said that the Scottsdale man’s actions do not appear to be felony destruction of mail, so the case is not a federal crime.

Scottsdale police, though, pointed out that the man’s dog is unleashed in the video, and that walking a dog without a leash within city limits is indeed a crime.