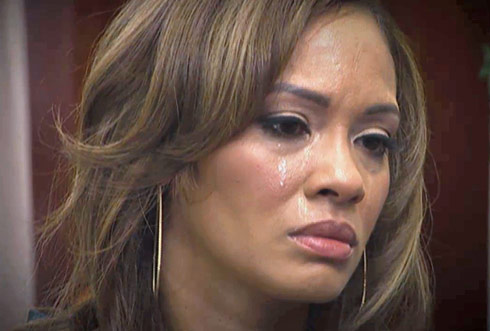 Oprah is doing her darndest to prop up her OWN network. O’s series of interviews, via Oprah’s Next Chapter, have done pretty well and now she’s launching a new show featuring life coach Iyanla Vanzant. The show, Iyanla: Fix My Life, premieres on September, 15 and it landed a woman who is certainly in the headlines of late, Basketball Wives star and ex-wife of Chad Johnson, Evelyn Lozada.

In a preview clip from OWN we see a tearful Evelyn being confronted and hit with tough questions as Vanzant attempts to get to the heart of Lozada’s emotional state. Via the show:

In the season premiere of the groundbreaking new series Iyanla: Fix My Life, life coach Iyanla Vanzant confronts the heartbreak and personal crisis of Basketball Wives star Evelyn Lozada, estranged wife of NFL star Chad “Ochocinco” Johnson. Iyanla works to uncover the source of Evelyn’s innermost pain, giving her the tools to let go and move forward with her life. Explosive secrets are uncovered and difficult truths are faced in the powerful two-part series premiere airing two Saturdays in a row, September 15 and 22, at 10 p.m. ET/PT on OWN.

Vanzant tells Evelyn, “You’ve been rewarded for being a thug among women. It’s gonna cost you.” She adds later in the clip, “Evelyn that’s off. [Speaking for her] That I can ignore a push and a shove but when he messes with my image… Oh, now we’ve got a problem.”

Vanzant asks Lozada what scares her the most and she answers, “Not being loved.” Should be compelling.

Chad Ochocinco claims he and Evelyn Lozada live together