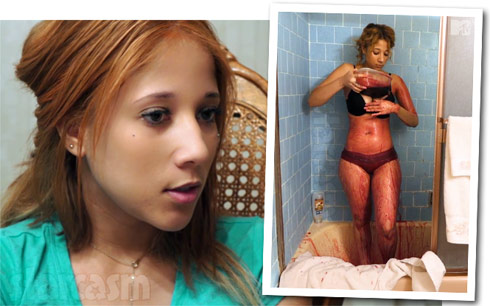 MTV’s True Life‘s like a box of chocolates, you never know what you’re gonna get — and that’s why it’s so addictive! After last night’s episode of Teen Mom OG (and the after show) I settled in on my couch and pulled the slot machine lever on a brand new True Life episode titled “I’m Obsessed With Staying Young.”

The episode synopsis reads, “Meet two young people who are putting their health and relationships on the line in their quest to look like teenagers forever.” One of those two people is 19-year-old model Chanel who spends $300 a month on makeup and beauty supplies in an attempt to stay looking young. But Chanel wants to take things a step further as she breaks the news to her father and grandmother (and viewers) that she wants to bathe herself in animal blood! 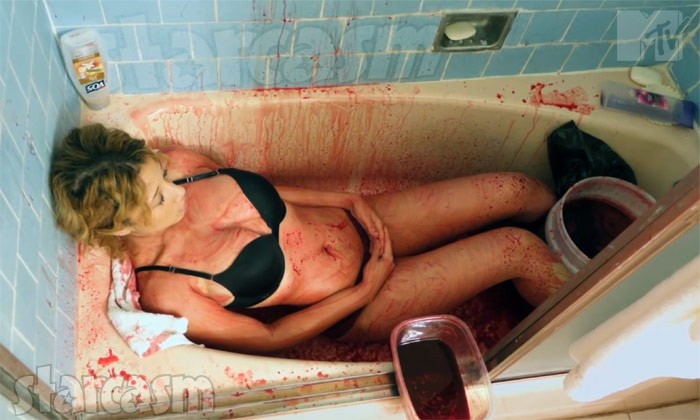 Here’s the full episode. If you want to skip ahead to the blood bath, that scene is right around the 27:00 mark.

Chanel’s grandmother Lois (who is the stone cold voice of reason, and the true star of the show) takes a walk with her granddaughter to express her concerns:

GRANDMA LOIS: I want you to listen to me. I’m afraid you’re going to harm yourself seriously trying little remedies that other people have told you about. Bathing in blood? That’s gross! That’s not going to keep you young, that’s gonna make you sick!

CHANEL: I feel like, thousands of years ago or whatever, they did that and they preserved their youth.

GRANDMA LOIS: Do you have any documents on that? Do you know where I can find some? I would like to read up on that.

Chanel remains steadfast and undeterred. “No one understands why I need some animal blood,” Chanel explains, “but I need it to keep looking young because it’s the only way I am going to feel comfortable enough to start working again.” It is revealed at this point that Chanel hasn’t worked for weeks.

So, Chanel visits a local butcher to buy some blood. Here’s how that conversation went:

CHANEL: I want at least about 2 or 3 gallons.

BUTCHER: You want beef or pork?

BUTCHER: No, I mean the blood.

CHANEL: Oh! [to her friend] Should we do beef or pork? Let’s do pork. Pork is pig, yeah?

Chanel returns home with her bucket of blood and after stripping down to what I assume is her least favorite bra and panties, she hops in the tub and begins slowly recreating the infamous scene from Carrie: 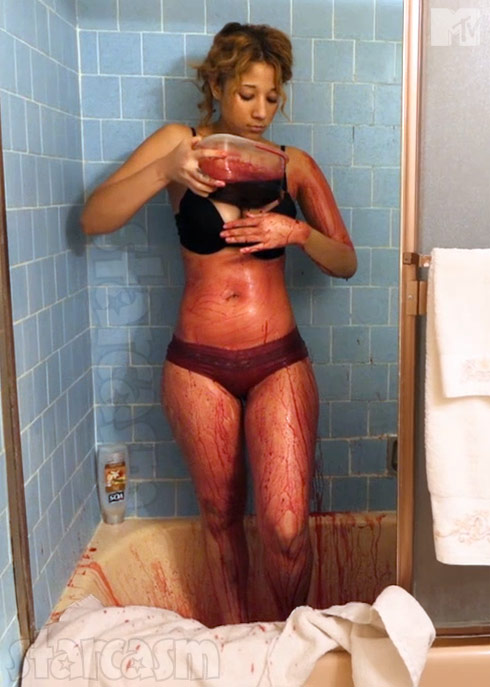 My jaw hit the floor at this point — I couldn’t really believe what I was seeing! (I will say that it was a great relief to know for sure that I absolutely do not have an animal blood bath fetish.)

Early in the process Chanel holds up a piece of something and says, “The blood is really cold, and we have, like, some thick part. I’m not sure if it is, like, the coagulated blood or not.” This is definitely one of those situations where a picture is worth a thousand words, so… 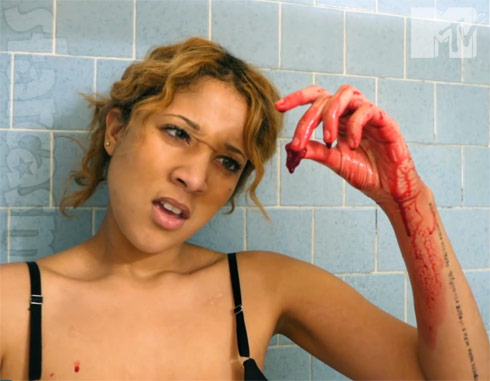 Chanel has one major problem, though, as she is unable to reach her back. So, she recruits Grandma Lois, who is reluctant but willing to help. She pours blood on her granddaughter’s back, and Chanel offers up her appreciation:

CHANEL: Thank you so much grandma. I love you. That’s real love there. Somebody will poor pig’s blood on you. That’s love.

GRANDMA LOIS: Thank you for defining it for me.

So what day of the week is for grandparent crushes?

In answer to Grandma Lois’ earlier question about documentation on whether or not animal blood baths are beneficial to the skin, I couldn’t really find anything. There was Countess Elizabeth Báthory de Ecsed, a female serial killer from the turn of the 17th century who was nicknamed the Blood Countess and Countess Dracula after rumors spread that she bathed in the blood of her victims. Elizabeth Báthory turns up often in fictional works, most recently serving as part of the inspiration for Kathy Bates’ character Delphine LaLaurie in American Horror Story: Coven.

Michael Jackson reportedly took a bath in animal blood, but it wasn’t to retain his youthful appearance. Here’s an excerpt from the book Michael Jackson, the Man Behind the Mask: An Insider’s Story of the King of Pop:

Michael had attended a voodoo ritual in Switzerland where a witch doctor put a voodoo curse on David Geffen, Steven Spielberg, Jeffrey Katzenberg and several others on Michael Jackson’s enemy list.

He paid $150,000 so that they would be cursed and hopefully killed, according to a lawsuit filed by Jackson’s former business partner Myung Ho Lee. The ritual included bathing in a tub filled with animal blood.

I am assuming, however, that the whole animal blood bath thing stems from Kim Kardashian’s infamous vampire facial, which captured the world’s attention for about two weeks back in 2013. 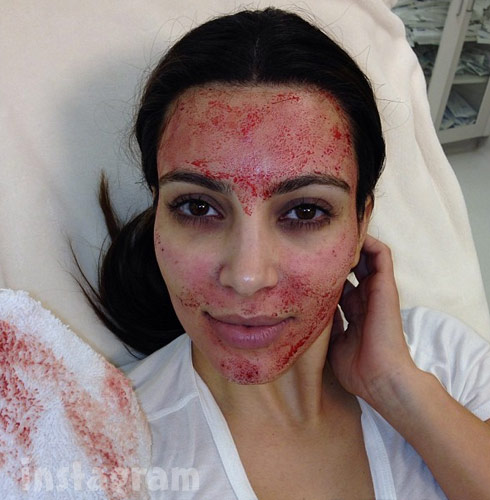 The “vampire facial” is actually a little more invasive than just a bath as it involves removing blood from your arm and then injecting that into your face in lieu of synthetic compounds like Juvederm and Restylane.

According to www.skinreviews.yolasite.com, “the vampire facial was created in 2010 by Dr. Charles Runels. Injections of platelet rich fibrin matrix are used to create a non-surgical facelift.” The site further describes how the procedure works:

Blood is taken from the person’s arm. This blood is then centrifuged so platelets can be isolated from the rest of the blood. The platelets are then activated with one of several substances. Once activated, it is injected back into the person’s face using a very fine needle to induce new growth of collagen, blood vessels and skin tissue. With this procedure, the skin is lifted away from the bone, to create not only new blood flow, but a skin volume. The face receives a sculpted look that appears to be more youthful.

My guess is that Chanel saw Kim Kardashian’s face covered in blood and the next thing you know she was at the butcher buying gallons of pig blood.

So how did Chanel’s story turn out? you’ll have to watch the episode to find out! Oh, and Chanel’s co-star Marcus is entertaining as well as he tries to convince his boyfriend that he’s the reason Marcus is an escort, and made an adu|t film, and is addicted to plastic surgery, and… Actually, this whole episode would still be a winner just with Marcus’ wardrobe!