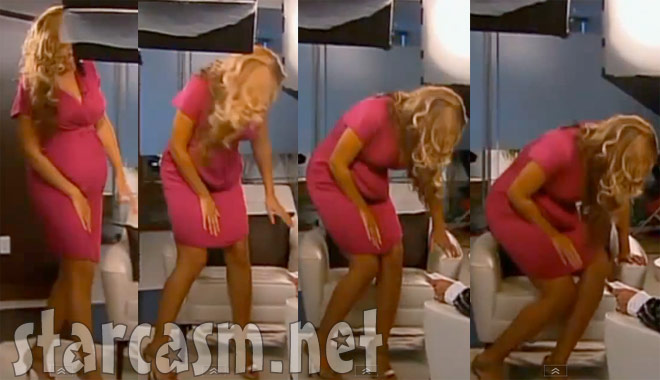 The notorious Beyonce rumor starters over at MediaTakeout.com revealed in early September that they had a “top industry insider” who was telling them the singer wore a prosthetic baby bump to the VMAs, where she famously revealed on the red carpet that she was expecting.

According to the source, Beyonce was in fact pregnant, but was only a little more than eight weeks along (not in her second trimester as she suggested) so she wanted to wear a fake baby bump to the awards that was more visible.

NOW the rumors are that Beyonce isn’t pregnant at all and that she continues to wear a prosthetic baby bump while a surrogate mother carries her actual child! Sounds crazy right? Well watch this video clip of Beyonce on Australian Sunday Night HD last night and keep a close eye on her “baby bump.” (The incident happens right around the 55 second mark – I cued up the clip to start just before that.)

It appears to completely collapse and then snap back! Let’s hear it for memory foam, huh? Wow!

Just in case you’re at work and the evil powers that be have blocked Youtube, here’s an animated gif of the fateful implosion:

Sunday Night HD host Molly Meldrum called into a radio station to confirm that Beyonce was pregnant! When asked about the “Weird angle:”

Weird angle in what respect? That’s the biggest nonsense I’ve ever heard in my life. She is well and truly pregnant, believe me, and the baby is due out in February. I think that’s weird. People’s imaginations tend to go a bit too wild. She’s a pregnant beaming woman. I’ve known Beyonce for a long long time since Destiny’s Child first rolled onto the scene.

Beyonce and Jay-z are very private people. She said nothing until the Video Music Awards and she was starting to show so she decided to tell everyone. A lot of young ladies have become pregnant, Whoopi and others have waited until the time to disclose they were pregnant]until they are at least 12 weeks.

She’s most definitely pregnant, those little booties I gave her will go to either the boy or the girl, whatever it may be.

Beyonce has to be quite tickled and in disbelief about all this craziness over her baby.

UPDATE – Beyonce’s rep is adamantly denying the singer is wearing any sort of belly enhancing fashion accessories. Meanwhile Beyonce announces she is launching a new line of maternity wear and Wendy Williams tackles the scandal on her show! CLICK HERE for all the latest in Baby Bumpgate!

Beyonce addressed these “Fake Baby Bump Rumors” with Katie Couric on 20/20, saying “You know there are certain things that are so far, it doesn’t even affect me. I am cool, it is so ridiculous and over the top.” Her representatives said the Fake baby bump speculation was “stupid, ridiculous and false.”

Seems like Beyonce was pregnant after all! Must have been some crazy maternity clothes, though, you never know what’s REALLY going on sometimes with celebrities. Many celebrities have been either open about using surrogates, or rumored to have used surrogates secretly. Either way, as long as the babies are well cared for and loved, who’s to judge?

Did Jesse James and West Coast Choppers use Nazi symbolism?

Kendall & Kylie apologize for ‘not well thought out’ t-shirts with Tupac, Pink Floyd, The Doors and more